In ladies singles, Sarah Mahboob made the major upset by beating top seed Sara Mansoor to setup final with Ushna Suhail who defeated Noor Malik in straight sets. Men's final will be played at 2:00pm on Saturday. 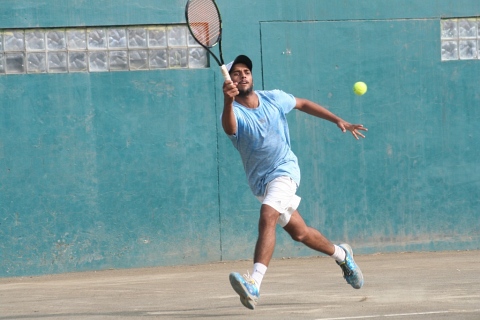 Muzammil Murtaza from Multan reached his second consecutive final of a major tournament in as many months after defeating Muhammad Abid in a thrilling three set match. Young Muzammil consistently stroked power shots at Abid who could only return a defensive ball. Muzammil won the first set 6-4 with an early break. In the second set however, Abid used his experience to test the patience of Muzammil by hitting soft balls close to the base line to take the set in the tie-break which Abid narrowly won 6-7(5). Muzammil came into the 3rd set with renewed determination and gave no change to the better seeded Adib to clinch the 3rd set comfortably at 6-1.


In the other semifinal, top seed Aqeel Khan wasted no time to brush aside Shahzad Khan in straight sets without any resistance with 6-2, 6-4 score. Shehzad could not match the class and experience of Aqeel who played comfortably throughout to setup a rematch of the last months Subh-e-Nau Championship final with Muzammil.

The final of the Men's Singles between Aqeel Khan and Muzammil Murtaza will be played at 2:00 PM at S.Dilawar Abbas PTF Tennis Complex, Islamabad.

Ushna Suhail and Sarah Mahboob moved into the Ladies Singles final by winning their respective semifinals. 3rd Seed Sarah Mahboob upset top seed Sara Mansoor in a thrilling and exciting three set match 6-7(5), 2-6, 6-4. Both the players displayed quality tennis and long rallies were witnessed throughout the match. The match lasted three hours. Second seed Ushna Suhail of Lahore proved too good for Noor Malik and won her encounter in straight set 6-0, 6-2. Ladies Singles final will be played at 9:30 AM tomorrow Saturday 11th November 2017.


In Junior U-18 Singles, the two top seeds from Peshawar, Muhammad Yousaf and Muhammad Shoaib advanced into the final by winning their respective semi finals in straight sets.

Hamza Roman from Peshawar and Jamal Shah of Islamabad moved into the final of Boys & Girls U-10 Singles.

Following are the results of Day 5: