Pakistani players ruled the badminton court in the main draws in all the categories in the Pakistan International Series Badminton Tournament at Liaquat Gymnasium Pakistan Sports Complex Islamabad. 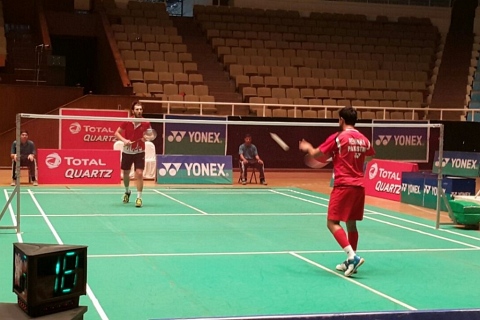 Pakistani players have won 6 out of 9 matches in Men’s singles category. Awais Zahid of Pakistan took 3 sets to down his Turkish opponent Enis Sesalan. His wining scores was 15-21, 21-15, 21-18. Other than Awais, all Pakistani players won their matches in straight sets.

Pakistan's players Ghazala Siddique and Khizra Rasheed had to fight hard to beat their native players Sara Mohmand and Javeria Tahir. It took 3 sets for them to win their matches.


Pakistani players also dominated in Men’s doubles event as they won 5 out of 6 matches. Only Ahsan Asif & Waqas Zahid lost their matches against playing their countrymen.


Following are the results of matches played so far: