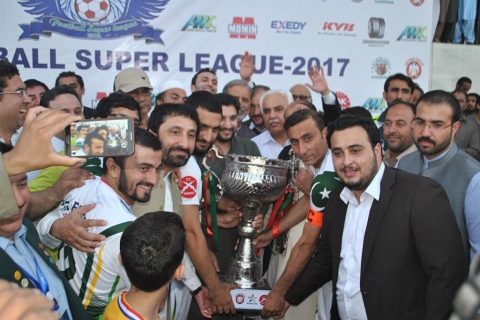 First minute goal from Riaz Ahmad of Shinwari FC set the tempo of the final match of FATA Football Super League-2017 against Khyber Eagle. Shinwari FC took the lead through unmarked Riaz Ahmad on the field attempt. It was through the ball given by team skipper Atiq Shinwari to Riaz Ahmad who did nothing wrong in dispatching it into the goal-post to make the tally 1-0.

Some fine opportunities were created by Khyber Eagle strikers as their forward players Mansoor, Muhammad Mujahid, Samad Khan, Sohail Khan and Irfan played some good attacking game which resulted in no less than four goal-scoring chances but failed to utilize any of them. Eagle’s players tried their best to equalize the goal but the defenders of Shinwari FC didn’t allow them to score any goal before the end of 1st half.


The front line of Shiwnari FC comprising Awais, Atiq, Izhar, Riaz, Yasir and Rasool played well and put in more pressure to double the lead but they failed due to spectacular goal-keeping by Khyber Eagle goal-keeper Ghazanfar. In the dying moments of the first half, Shinwari FC Jamrud Khyber Agency scored another goal through penalty kick which doubled the lead. Alamgir netted a fine goal to make the tally 2-0. Yasir, the center striker, was wrongly intercepted by Khyber Eagle goal-keeper Ghazanfar and referee signaled the spot in favour of Shinwari FC. This final match was supervised by Arshad, a FIFA referee, while Amin Khan, Allowddin acted as deputy referee and Qazi Asif acted as Match Commissioner.

After taking 2-0 lead, Shinwari FC fully controlled the whole trend of the ball position and did not give much chance to Khyber Eagle to strike back.

The final was all Khyber match as both the teams belongs to the Khyber Region. Landikotal’s Shinwari FC finally lifts the cup by defeating Khyber Eagles by 2-0. Riaz, who’s also playing for Pakistan National football teams scores the 1st goal for Shinwari FC in the very first minute of the 1st half and takes the lead for his team.


It is also to be mention here that a 20 member team will also be selected from among the 12 teams which participated in the event. That team will represent FATA and Pakistan in Malaysia and Indonesia which will help boosting the football in FATA and Pakistan.