Khyber Eagle entered into the semi-finals after a convincing 3-0 victory against Ghazi Ajab Khan of Dara Adam Khail in the ongoing FATA Football Super League-2017 being played at Qayyum Sports Complex Peshawar. 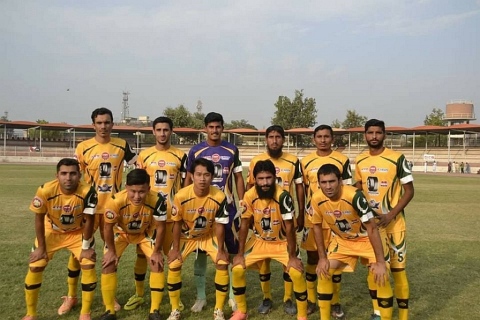 Khyber Eagle’s striker Hamza netted a fine goal in the very outset of the match through field attempt. Hamza got a free ball in front of the goal-post from Mujahid, the left winger, and quickly zoomed into the danger zone by dodging two defenders before slamming in a perfect goal.

After taking lead, Khyber Eagle put in more pressure and this time Mujahid saw his forceful kick into the rival goal-post by making the tally 2-0. On the other hands Ghazi Ajab Khan Afridi team tried their hard to reduce the margin but due to good defense of Khyber Eagle they were failed to do so.

At half-time Khyber Eagle was leading by 2-0. It was the second session in which Khyber Eagle got the third goal lead when inner striker international Mansoor slammed in a beautiful goal to make the lead 3-0.

In the dying moments Ghazi Ajab Khan Afridi team did some resistance but failed and Khyber Eagle won the match by 3-0.

Malik Saad Falcon will now face Shams in the last quarter-finals on Monday before the semi-finals and the final will be played on October 25 at 2.30 p.m.

Organizing Secretary of the event, Shahid Khan informed the chief guest that Bridgestone Tyre Japan, NGK and KYB Spark and Parts Middle East, Momin Oil Middle East, and Exedy have extended all out financial and moral support to the organizing committee to hold the event by involving youth of FATA in healthy activities.