After a thorny contest, Team GB defeated Team Karachi 2-1 in the beautiful Hunza Valley of Gilgit-Baltistan. 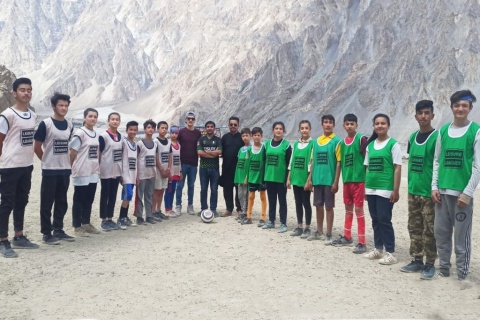 With the help of Leisure Leagues, the team competed in the beautiful Hunza Valley of Gilgit-Baltistan and a thorny football match was played between the local team named GB Team and Karachi Team which was won by the GB Team after a tough competition.


According to further details, Leisure Leagues, which has been promoting football in Pakistan for the last several years, organized an exhibition match in Gilgit-Baltistan to promote the football in backward area.

Gilgit and Karachi had a tough match. In the first half, Karachi scored one goal while in the second half, Gilgit scored two goals to clinch the victory.

A large number of spectators from Gilgit-Baltistan turned to the ground to watch the match and celebrated the victory of their team in the form of a rally.

In this regard, Mahmood Trunkwala, who introduced Leisure Leagues in Pakistan, said in his message that Leisure Leagues wants to show a bright and positive face of Pakistan to the world.

The arrival of international players in Pakistan and the organization of football matches across the country is a great achievement of the Leisure League. Chairman World Group Mahmood Trunkwala said that there are many talented football players in Gilgit-Baltistan who are working hard to be included in the national mainstream. Good and hardworking players will be given access to international matches.