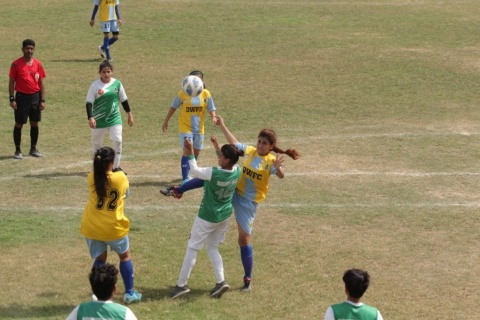 The Executive Committee members included Nasir Kareem Baloch from Sindh, Jameel Ahmed Hoot, Dost to the cause of Football in Pakistan. He further elaborated his desire for all the participants to come together and work for the development of the game of Football.

"Football has suffered for far too long in this country. If we are able to work together with good faith, transparency and the commitment to bring the game alive again, then there is no goal too hard to achieve".

The session took decisions on a number of ongoing matters;

President Syed Ashfaq Hussain Shah expressed his gratitude and thanked the members for their commitment ratified Inter Club & Inter District Players Transfers in June 2021 along with approval of back to back football activities till December 2021.

The National under 23 Football Championship is scheduled to take place in Abbotabad, in July this year, where all the provincial and regional teams are expected to participate.

Following this event, decisions will be taken upon the preparations of Pakistan Premiere League where we will see Pakistan’s ‘A’ Division Departmental and Club Teams participating.

At the end of the league, seminars and training sessions for coaches, referees and match commissioners will be initiated.

PFF is especially invested in youth development programs and through this hopes to bring forward the football talent in Pakistan and give them a platform to grow. For this purpose, PFF will hold intercity Under-19 Football league with all departmental, provincial and regional teams.

PFF is going to hold a historic Pakistan Football League in December 2021. In which Pakistan's talented players will be given the opportunity to play on merit. This league of Pakistan will be introduced with a new vibe. Which will be a milestone in the history of Pakistan football and whenever a national team will be formed. The players of this great and glorious league will join it. The national team will be the future of Pakistan, the positive results of which will give Pakistani football a worldwide recognition. Which is a long-standing desire of every Pakistani footballer and football fan.

During the meeting, members of the executive committee Nasir Karim Baloch and Jameel Hoot demanded strict action against the semi-finalists of the National Women's Football Championship 2021 held in Karachi in March 2021 for violating the orders of the PFF. This matter was referred to the disciplinary committee.

The Executive Committee PFF has approved the roadmap for the 2022 to 2026 elections under which the election process will be initially conducted at the district level as well as at the provincial level. This will be done after the process of online registration and club scrutiny has been completed.

The Executive Committee unanimously agreed that the provincial and district football associations had completed their terms. This matter was handed over to the Emergency Committee to close.

Furthermore, PFF called for the nominations for Chairman, Deputy Chairman and members of the Standing Committee.