Vice President International Socca Federation (ISF) Shahzaib Mehmood Trunkwala has said that Pakistan will feature in the third edition of Socca World Cup, which will be held in Mexico next year. 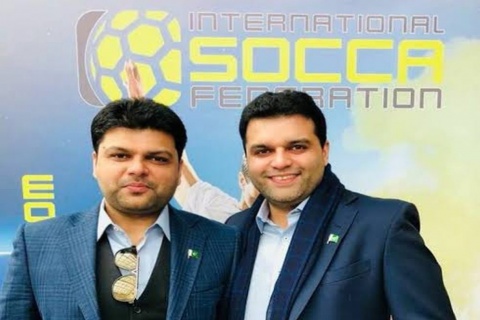 Vice President International Socca Federation (ISF) Shahzaib Mehmood Trunkwala has said that Pakistan will feature in the third edition of Socca World Cup, which will be held in Mexico next year.

ISF held six-a-side world cup events in Portugal and Greece in 2018 and 2019, respectively, but like many other international sports events, coronavirus pandemic in the year 2020 forced ISF to postpone its marquee event.


“But we will bounce back strongly and hold the event in a befitting manner in Mexico,” Trunkwala told PPI. “It is expected that footballers from across the globe will gather in Mexico for the great event,” he added.

Trunkwala is also the CEO of the World Group, which owns Leisure Leagues franchise. Leisure Leagues has held several small-sided football events throughout the country to send the top club, which is decided after a long process of district, city and finally national championships, to represent Pakistan in Socca World Cup’s both edition in Europe.


“Unfortunately, the pandemic also brought Leisure Leagues’ activities to a standstill. We were forced to downsize our team amid the recession that ensued. But now we have gradually been reviving our activities and we are hoping to soon initiate all our activities, hopefully after successful vaccination process,” he said.

Trunkwala further said that the process to find national champion club would start once the activities begin.


“Insha Allah, we will send Pakistan team to feature in the mega tournament. We believe it is our national duty to portray a soft image of Pakistan. When we are enabling our top national club to play alongside other foreign teams, we are doing just that,” he stressed.

Trunkwala is wary of the travel restrictions due to COVID-19.