The Sardar Khalid Ibrahim Memorial Tournament 2021 wrapped up successfully where Gangal FC won the trophy by 4-2. 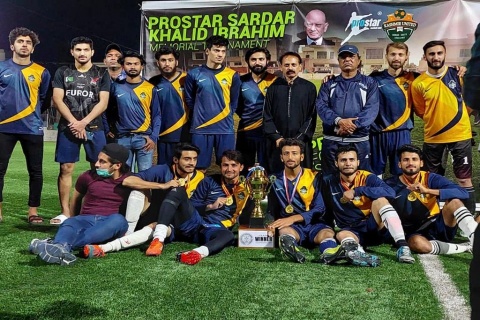 The Sardar Khalid Ibrahim Memorial Tournament 2021 wrapped up successfully where Gangal FC won the trophy by 4-2.

The match kicked off between Gangal FC and Nishter Fc where both teams sized each other up in the initial moments. However, things heated up as Syed Abdullah Shah got a red card for Gangal within the first 10 minutes of the match. Going down to 10 men was quite nervy but the team held on and created several great opportunities which should have been converted. Nonetheless, the score remained even at 0-0 at the half time break.

In the second half, Gangal continued to attack and mount pressure on the opponent's goal and that pressure paid off as Salman won and converted a penalty to give Gangal the lead. But Nishter mounted a comeback and levelled things up soon after.

With the score 1-1, the momentum seemed to turn towards Nishter, however Alamgir scored a worldie scissor kick goal, on the volley from a cross by Salman from the right. Soon after, Ruhullah doubled Gangal's lead after latching on to a pass from Alamgir and scoring past the keeper. Despite down a man, Gangal seemed unfazed by Nishter's attacks and pressure as the defence held strong and refuted each attack with precision and strength.

As the match drew towards the closing stages, the captain of Gangal - Muhammad Salman Khan - turned up the style and scored a golazo. Seeing the keeper off the line, he hit a first time effort towards goal from almost the halfway touchline which looped over the keeper for Gangal's fourth goal; probably a contender for the goal of the tournament alongisde's Alamgir's goal that same day.

However, Salman failed to convert a late penalty for his hat trick which would have been a cherry on the top. The penalty had been won after Nishter' s captain had been sent off with a second yellow card for a challenge in the penalty box. In the dying minutes, Nishter won a penalty for themselves and converted it to make it 4-2, but it was just a consolation goal.