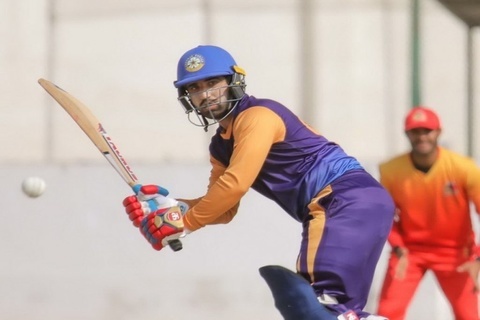 Sindh will play Central Punjab in the first semi-final on Friday 29 January while Khyber Pakhtunkhwa take on Northern in the second semi-final on Saturday 30 January. Both semi-finals will be played at State Bank Stadium.

Centuries by Adil Amin (sixth List A hundred) and young wicketkeeper-batsman Mohammad Haris (maiden List A hundred) took Khyber Pakhtunkhwa to their formidable 370 for nine score. The two added 227 runs for the sixth-wicket to rescue their side from a wobbly position of 99 for five.

Balochistan’s Imran Farhat signed-off from professional cricket with a scintillating 123 off 88 balls. The left-hander who was making his last-ever appearance hit 17 fours and three sixes as Balochistan fell a mere 23 runs short of the target as they were bowled out for 347 in 47 overs.

After adding 119 runs with Bismillah Khan (42) for the first-wicket, Imran added 90 runs for the second-wicket with Haris Sohail (40).

Akbar-ur-Rehman (50 off 52 balls, three fours) and Ayaz Tassawar (53 off 49 balls, four fours, one six) scored half-centuries for Balochistan but they failed to take their side to the target. Balochistan lost their last seven wickets for addition of 27 runs as the lower-order failed in their pursuit of quick runs.

Balochistan who finished with six points were already out of contention for the semi-finals before the match began.

Northern won the toss and opted to bat first. Rohail Nazir top-scored with 88 off 71 balls, the wicketkeeper-batsman struck seven fours and five sixes in his innings. Rohail added 138 runs for the fourth-wicket with Umar Amin who scored 83 off 78 balls with the help of 10 fours.

Hammad Azam and Mubasir Khan scored 39 and 30 respectively using the long handle effectively as they helped Northern amass 337 for eight in 50 overs.

Southern Punjab started losing wickets at regular intervals after 53-run stand between Shan and Sohaib Maqsood (22) for the second-wicket was broken. Shan held the innings together and kept scoring runs at one end on his way to 141 off 128 balls, however his dismissal ended Southern Punjab’s hopes.

By virtue of their victory Northern who finished with 10 points qualified for the semi-finals, while Southern Punjab were knocked out.

Khurram Manzoor’s 27th List A century helped Sindh reach 277 for six in 50 overs. Khurram remained undefeated facing 163 balls for his 143 that included 15 fours and one six.

Khurram added 159 runs for the third-wicket with Asad Shafiq who scored 85 off 93 balls with the help of seven fours.

Central Punjab had to fight hard in their chase and pursuit of a semi-final spot as they took 48.3 overs to reach the target. Opener Tayyab Tahir top-scored with 93 off 102 balls, his innings included eight fours and two sixes.

Raza Ali Dar scored 71 off 72 balls with the help of one four and two sixes to provide valuable middle-order support during the Central Punjab chase.

Young all-rounder Qasim Akram remained unbeaten with 44 off 40 balls as he guided his side to the target along with Zafar Gohar who scored a brisk unbeaten 28 off 13 balls (two fours, two sixes). The two added 52 runs for the seventh-wicket.