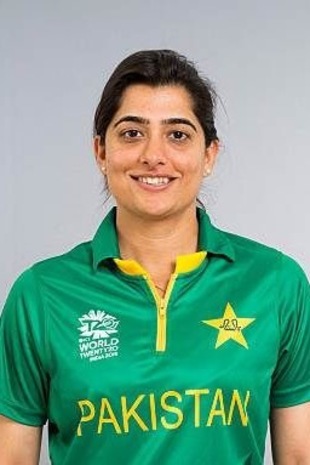 In October 2018, she became the first Pakistani women cricketer to rank number 1 in ICC ODI bowler ranking. She has led Pakistan to two Gold medals in Asian Games 2010 and 2014. She was announced Player of the Tournament at the 2008 Women's Cricket World Cup Qualifier, and currently ranks 1st in the Women's ODI Bowlers in the ICC Player Rankings. She has been in Top 20 ICC rankings for last 9 years. During her Captaincy 8 players from Pakistan have made their way into the top 20 ICC rankings.
In February 2017, during the 2017 Women's Cricket World Cup Qualifier, she became the first Pakistani woman cricketer to take 100 wickets in WODIs. She stepped down from the role of being the captain of the team in September 2017 to which Bismah Maroof was then made captain of Pakistan women's ODI team. In February 2019, she became the first woman for Pakistan to play in 100 Women's Twenty20 International matches and for now, she has announced to take a break from international cricket.
2010
At the 2010 Asian Games, Mir led the team to a gold medal.
2011
- By Winning the National Championship for the fourth time in a row, Sana Mir has become the most successful captain of Pakistan at domestic level. Her team has yet to lose a game at domestic level in the past four years.
- Sana Mir also led the Pakistan team to their first ever tournament win in both the T20 and ODI formats when they played in Sri Lanka in 2011. The teams in the Quadrangular Cup were Sri Lanka, Pakistan, Ireland, and Netherlands. She was also awarded the Women of the Match title in the T20 Quadrangular Cup final against the Netherlands.
2012
- The Pakistan Women's Cricket Team qualified for the 2012 T20.
- At Domestic cricket, the ZTBL team has won the first ever BB tournament and 7th National championship under her Captaincy. This makes it 5 in a, Mir has become the first ever female cricketer from Pakistan to be awarded Tamgha-e-Imtiaz on 23 March 2012, for her services in cricket.
2013
- Pakistan Team qualified for Women's ODI World Cup under her captaincy and for the first time ever, the team also beat South Africa, thereby, improving their world ranking from 8 to 6.
- At Domestic cricket, the ZTBL team has won the second BB Tournament and 8th National Championship under her Captaincy. This makes it 6 in a row.
- Sana Mir became the first woman cricketer to receive PCB Woman cricketer of the Year Award 2013.
- Pakistan Women Team showed their best performance on a European tour in 2013. The team has beaten England for the first time in any format and leveled the T20 series. The team has won 11 matches in a row. After the completion of this tour Pakistan women's team has 6 members in ICC top 20 players ranking.
2018
- In October 2018, she was named in Pakistan's squad for the 2018 ICC Women's World Twenty20 Tournament in the West Indies.
Edit this Profile


33 year old, Sana Mir is a cricketer and the former captain of the Pakistan National Women's Cricket Team in ODIs and T20Is. She is from Abbotabad Region of Khyber Pakhtunkhwa and has completed her Bachelors in Statistics and Economics. Her favorite cricketers are Waqar Younis, Imran Khan and Jonty Rhodes.