Trials for the Khyber Pakhtunkhwa Badminton Team for the National Junior Badminton Championship commenced at the Pakistan Sports Board Coaching Center, Peshawar. 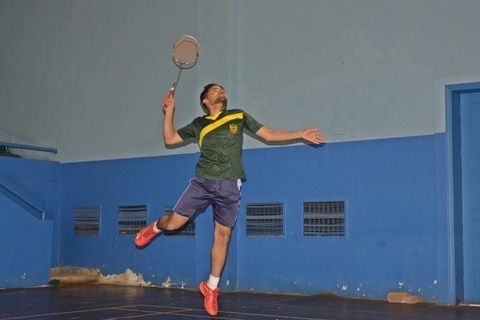 Trials for the Khyber Pakhtunkhwa Badminton Team for the National Junior Badminton Championship commenced  at the Pakistan Sports Board Coaching Center, Peshawar.

More than 100 players from Khyber Pakhtunkhwa are participating in the trials, followed by a camp to be set up at the same venue under the aegis of Khyber Pakhtunkhawa Badminton Association.

The event had the presence of Muhammad Zahid Shah, international coaches Nadeem Khan, Hayat Ullah and other important personalities.

The camp will be shifted to the main venue at Abdul Wali Khan Sports Complex Charsadda after finalizing the names for the camp of the selected probables in different categories.

The National Junior Badminton Championship starting from January 28 in which more than 100 players from across the province participating in U-15, U-17 and U-19 trials.

For any query organizing secretary Mr. Muhammad Amjad Khan or Secretary General Khyber Pakhtunkhwa Badminton Association can be contacted at 0300-9598890.

Project Director Murad Ali Mohmand said that badminton courts and mats are being set up in different districts across KP in connection with Prime Minister 1000 Playground Project, which would be held further in promoting badminton in Khyber Pakhtunkhwa.

He said for the first time work is going on to have Climbing Wall in the premises of Qayyum Sports Complex and it would be completed by March this year. He said Secretary Sports Abid Majeed also visited and inspected the ongoing work.

He said 70 percent work has been completed on the Climbing Wall in Qayyum Stadium, having multiple walls facilities and the maximum height of is 52ft. Murad Ali Mohmand Project Director Sport’s is executing the said scheme through the Engineering Wing headed by Chief Engineer Ahmed Ali with other teams comprising Engr. Paras Ahmad and Umar.

He disclosed that Qayyum Stadium Climbing Wall will be ready before 28 Feb 2021 while it’s decided that all other Climbing Walls frame structures will be made ready in Mardan Sports Complex and after it’s completion the Climbing Walls will be transported to other District’s through 20 wheeler’s heavy vehicle. The frame structure is of best quality with steel frames and imported material from France.

He said the cost of one Climbing Wall is 10 million. Murad Ali Mohmand said Climbing Wall facility would give opportunity to players to get registered for this game for national and international levels. He said professional trainers for players training would be recruited for the climbing wall.

Chief Minister KP is getting weekly progress on Development of 1000 Playing Facilities in Khyber Pakhtunkhwa Project and has issued directives for the early completion of the sports infrastructure in merged tribal areas.