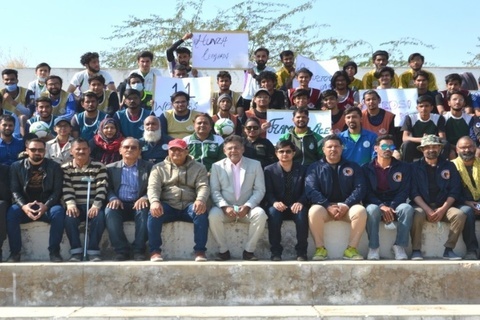 The Football Champions League 2020-2021, conducted at Karachi University football ground, wad organized by PMFA with the collaboration of Sindh Games Association and Karachi University Sports Department on the occasion of Quaid-e-Azam Day.

The event was sponsored by Mamjees Studios, Global Travels and DEWA Trust.

Sixteen teams participated in this league and, on the basis of points table, the final was played between Eleven Wonders and Reads.

The Reads won the Championship after an exciting match.

Mr. Mudassir Arain, Chief Guest, expressed his pleasure during his address and said that SGA will extend their cooperation in future to support such appreciable events for youth on National Days.