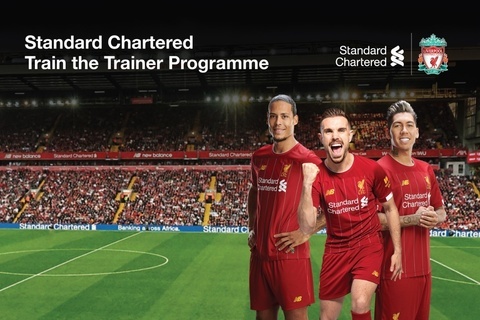 Under the slogan of “The Liverpool Way”, Standard Chartered Bank (SCB), and Karachi United Football Club (KUFC) launched their 'Train the Trainer' manual in Urdu and English languages with a partnership of the Liverpool Football Club (LFC) Academy to train the local community coaches in Karachi.

The ‘Train the Trainer’ manual is made in collaboration with LFC academy and is according to the training that 12 KUFC coaches received in Dubai under official LFC academy coaches earlier this year. The manual has been made in two languages (English and Urdu) for the local coaches to understand easily.

The Head of Corporate Affairs and Brand & Marketing, SCB, Khadija Hashimi, while talking at the manual’s virtual launch, said they aim to educate and train as many coaches as possible through their ‘Train the Trainer’ programme. “The number of trained coaches has already multiplied in months. The 12 coaches trained in Dubai now have trained local coaches to take the count of trained coaches to 60.” She further added that this manual’s launch would further help the other football coaches around Pakistan take advantage of the partnership and then train them in ‘The Liverpool Way’.

The CEO of Karachi United, Imran Ali, said, “This is the first time an international football club has partnered with the local club intending to improve Pakistan’s coaching standard. This manual will not only help the local coaches in Karachi but the coaches around Pakistan.” He added that the 12 top community coaches traveled to Dubai to get trained under the head coach of LFC Academy, Steven Gillespie, along with Coach Paul O Brien and now they have come back and trained their assistant coaches. “We have received positive feedback from the parents and the kids that the coaching standard has increased since the Train the Trainer programme began,” said Ali.

The head coach Gillespie said that the coaches consumed the training really well, and they were quite responsive to all the things taught. “The philosophy of LFC Academy’ The Liverpool Way’ is not just about the on-pitch activities but also the off-pitch behaviors. This will help them in understanding what the Liverpool Way is all about,” he said.

“The best thing about this programme is that the kids are coached and trained the same way as the other professional players at LFC Academy. The manual has the same philosophy that we have at the academy. This will defiantly improve the standard of football coaching in Pakistan,” he added.