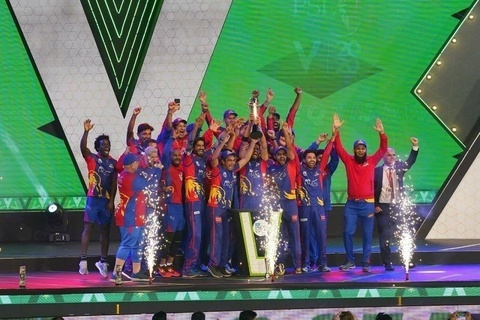 Karachi Kings have become the new champions after defeating Lahore Qalandars by five wickets in the Pakistan Super League (PSL) 2020 final at the National Stadium, Karachi.

Babar Azam was named Player of the HBL Pakistan Super League 2020 after Karachi Kings defeated Lahore Qalandars by five wickets to win their maiden title since the inception of the PCB’s marquee event in 2016.

Babar finished the tournament with 473 runs, including three players of the match awards, that also helped him to win the award for Best batsman of the HBL PSL 2020 award.

Babar is the second Karachi Kings’ player to win the prestigious award after Ravi Bopara was declared Player of the HBL PSL 2016 after aggregating 329 runs and taking 11 wickets.

Although Babar Azam's unbeaten 63 would likely steal the headlines, the victory was actually built on the hard work done by Karachi's unheralded, uncapped and unknown medium-pacers Umaid Asif, Waqas Maqsood and Arshad Iqbal.

The trio laid the foundation over which Babar later capitalised and got his side the victory in a comfortable run chase.

Umaid, Waqas and Arshad combined to bowl 12 over for Karachi, gave away just 62 runs and picked up six wickets - two apiece.

Neither has ever played at the highest level but still proved more than a match for Lahore's studded, in-form batting line-up that threw away a solid start after defeating Lahore Qalandars by five wickets in the Pakistan Super League (PSL) 2020 final at the National Stadium.

From 68-0, they managed a meek 134-7 as the openers' slow batting put pressure on the rest of the batters, who, in their attempt to up the scoring rate, kept losing wickets. The proverbial fireworks kept on getting postponed and in the end, never came.

Shaheen’s Lahore Qalandars’ team-mate Ben Dunk lifted the award for Best wicketkeeper of HBL PSL 2020 after accounting for nine batsmen behind the wickets.

In their defence, Lahore batsmen can claim that the wicket was 'double-paced', which it was as the ball did not come on to the bat all innings - even for those known for their clean hitting.

In response, Karachi always looked in control until a late flurry of wickets but Babar Azam's presence got them through.

Ben Dunk was named the wicketkeeper and Shaheen Afridi the bowler of the tournament.