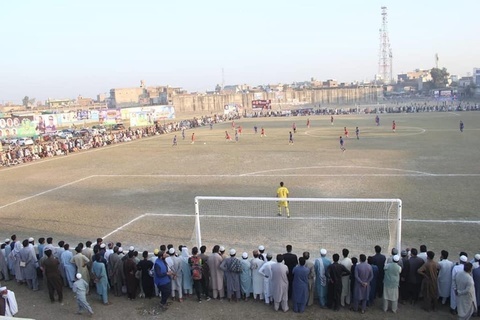 At the Younas Stadium Mardan, the 11th match of the Mardan Premier League (MPL) ended in a 1-0 win for the Hotis.

With this win Hoti Eagles overtake Khaksar City in Group A Table by superior Points Table.

However, Takht Bhai Kings and Toru Mayar United who are now out of the league but they have won the hearts of the crowds by their attacking play and spirit of sportsmanship.

As the next match of Group B between the Stars and the Warriors is awarded to Stars so the Group B winners Sikandari Kas Korona Stars will face Group A runner's up Khaksar City on 5th November in the Knock Outs whereas the first Semi Final will be between Hoti Eagles and Mardan Khas Tigers on 4th November at 2 PM. The final will be played at Younas Stadium on 6th November (Friday) at 2 PM.

The Chief Guest in the presentation ceremony was Siyar Khan Mandoori, Ex-Hockey player and social figure. Regional Sports Officer was also present on the occasion. Pashto singer Irfan Jamal also came to the support of Eagles. The guests congratulated the MPL Chairman MPL Nawaz Mandoori, Executive Committee and Team Voice of Mardan for their arrangements and volunteer services for MPL.