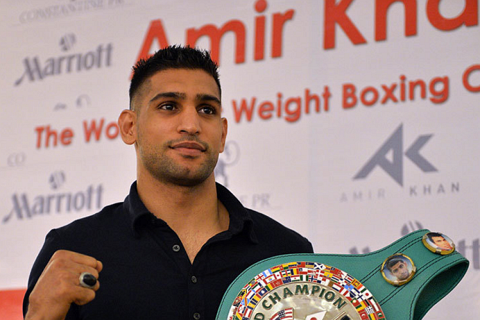 HBL Superstar Boxing Event      PC, Karachi
Boxing champ Amir Khan is in Pakistan to organise the country's first ever international boxing event in Karachi featuring European boxers.
Khan, who became Britain's youngest boxing medalist at the age of 17, has vowed to promote the game in Pakistan. Two days after the event, Amir will inaugurate his boxing academy in Islamabad.
"I want to promote the sport in Pakistan and on June 4, I am opening my academy in Islamabad," he said.
"I want to expand academies across the country. There is a lot of talent in Lyari, Karachi. I want promote boxing in those areas. I want to build gymnasiums in different areas of Karachi.

"We could produce so many world champions from Pakistan"

The receipts from the boxing event will be used to build water wells in Thar. "The money we raise from the June 2 event I am going to spend it building water wells in Thar. We need clean and healthy water for the people there," the 29-year-old said.
Amir, who visited Lyari last year, praised the young boxing talent of the neighbourhood that is usually struck by chaos and anarchy. "There is amazing talent in Lyari. I cannot believe it," said the orthodox-styled boxer.
"We could produce so many world champions from Pakistan not just from Lyari. There are boxers there who have good technique, good fitness, all they need is gymnasiums and someone to support them and I am here to do that... Within the next couple of years you will see a big change."