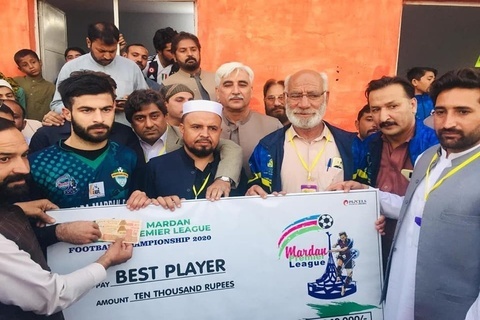 The clash of the former princely states in the MPL Football Championship 2020 Group A, Hoti Eagles against Toru Mayar United, was won by the United in an electrifying and high stakes battle in front of an even bigger crowd at Younis Stadium, Mardan.

Toru Mayar United came all guns blazing as this match was an almost do or die clash for them. They caught the confident Eagles off-guard who were missing their star player Mansoor Khan.

The pressure paid as Wasim (in Shirt # 8) scored with a header, who was assisted with a header by Abdullah (Shirt # 10) off a dangerous cross in the 10th minute. A lovely run by the United number 7, Hasan, from the opposing half won the penalty for his side and he scored with ease by deceiving the goal keeper Usman in the 17th minute.

Hasan went into a 'Sajida' prostration in jubilation and the players jumped on him in celebration. Eagles missed three close opportunities in the first-half but they looked stunned in the half with a shocking start to the match.

The second-half was dominated by the Eagles with 80% possession, but the United defence held firm. Player of the Match, Yasin (shirt # 5), who,despite an injury to his hand, gallantly threw himself around to fend off the attacks led by Eagles captain Riaz Khan (Shirt # 10), international player, from Hangu along with national stars Mir Khan alias Mero (his brother) and Mansoor Khan's brother, Zahoor Khan (shirt # 11).

The game came alive when Farman alias 'Shao' scored an equalizing header. However, United held their nerve to win the match. Nevertheless, the Eagles goal was very important as it puts Hoti Eagles on top of the Group-A table on account of more goals scored.

The main sponsors of Toru Mayar United are ANSI College whereas Hoti Eagles' main sponsors are Arabian City. All Matches are being live streamed by Voice of Mardan Facebook page on the pure voluntary basis especially the diaspora community of Mardan living over sees.