Directorate of Sports Khyber Pakhtunkhwa and district administration have jointly organized “Run for Kashmir Marathon” to express solidarity with Kashmiris. 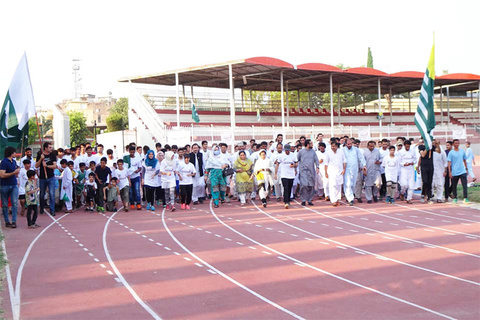 Directorate of Sports Khyber Pakhtunkhwa and district administration have jointly organized “Run for Kashmir Marathon” to express solidarity with Kashmiris.

A large number of people from different Games turned up to cheer for the runners, while the participating athletes, including professional racers, amateurs, youngsters and some elderly people seemed energetic.

Pakistan No. 1 junior squash player Komal Khan and South Asian gold medalist in Karate Murad Khan, both hailing from Khyber Pakhtunkhwa, carried the national flags of Pakistan and Kashmir during the start of the marathon.

Players with disabilities along with hundreds of athletes from various Games turned up showing solidarity with the people of Kashmir during their participation in the Run for Kashmir Marathon. The participants held national flags and flags of Kashmir, wearing T-shirts inscribed with “Kashmir Banay Ga Pakistan”.


The race began at 5;30 and continued up until 7:00 p.m before a stunning firework. The Peshawar Sports Complex was also beautifully illuminated with colourful lights in connection with the 73rd Independence Day.

Additional Deputy Commissioner with other Assistance Commissioner, DG Sports and Miss Rashida Ghaznavi distributed T-shirts among all the participants of the Run for Kashmir Marathon.

Asfandyar lauding the Kashmiris one-year-long struggle against Article 370’s revocation in Indian illegally Occupied Jammu and Kashmir said Pakistan has always stood by the Kashmiri people for their right to self-determination.


He said the Run for Kashmir Marathon is aimed at reiterating Pakistan’s commitment to always support the Kashmiris’ right to self-determination. Soon after the marathon ends, the athletes chanted slogans and condemned the “Indian terrorism” in the illegally occupied valley. They said that freedom was the basic right of the oppressed Kashmiri people and that the sacrifices of thousands of Kashmiri people will soon bear fruit.