2018 Argentina Youth Olympics bronze medallist, wrestler Inayatullah has said if state backs him for four years then he will ensure the nation gets a medal at the 2024 Olympics. 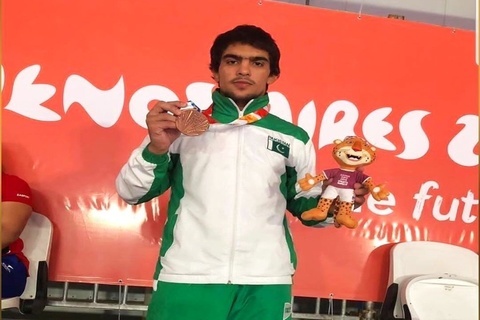 Pakistan’s highly talented and 2018 Argentina Youth Olympics bronze medallist wrestler Inayatullah has said if state backs him for four years then he will ensure the nation gets a medal at the 2024 Olympics.

“Yes, the target is achievable. I can win a medal in the 2024 Olympics if the government starts supporting me from this year,” Inayat said.

Inayat, now 19, grabbed bronze in the 2018 Youth Olympics when he defeated US wrestler Carson Taylor Manville 3-1 in the -65kg in Buenos Aires. Pakistan government rewarded the youngster with handsome prize money of Rs5 million for the stunning achievement.

“I know the standard around the world and I believe in myself and will inshaAllah make Pakistan proud,” Inayat said.

Inayat’s father Zahid Khan remained national champion for over a decade besides claiming medals in the international circuit.


Inayat was roped in by WAPDA after he won gold in the 2012 National Under-14 event for a minor stipend of Rs5000. Now he is a permanent employee of the department and is in Grade-16.

Inayat these days is nursing a knee injury. After a knee surgery around two months back, doctors advised him to take rest for six months.

“I am doing light training and hopefully will recover within the stipulated period,” Inayat said.

Even after developing a serious knee injury while training for the Peshawar National Games last year, he went on to win gold not only in the National Games but also in the 13th South Asian Games in Nepal.

“I wanted to add to my feathers and did not even let my father know exactly about the injury,” Inayat said.

“I had in mind a seat in the 2020 Tokyo Olympics but when I got injured I felt it was not possible. Now that the Olympics have been delayed I am looking forward to trying my luck in the qualifiers after recovering from the injury,” said Inayat, an exceptionally talented grappler.

When he was going to Argentina for Youth Olympics, Pakistan Wrestling Federation (PWF) secretary Arshad Sattar told this correspondent that he would win a medal there. And he did. Inayat was trained for around 12 years at Peshawar by Mohammad Naeem, an international wrestler of Afghanistan. Iranian coaches also labelled him as a future Olympics medallist.

Inayat said that he can achieve big targets if he is supported. “Naeem worked hard with me to help me achieve what he could not achieve as a wrestler because of a bullet injury,” said Inayat, who has around 35 players training under him at his academy.

“I am a coach too, training around 35 wrestlers in Peshawar,” he said.