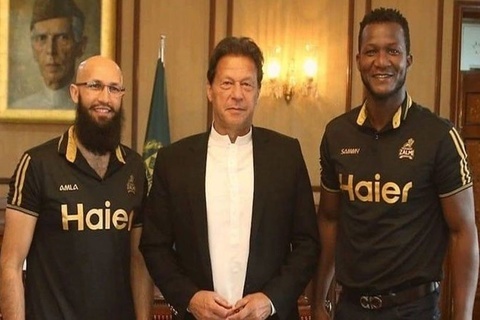 While speaking in a Youtube video, Amla said that he was happy to see the entire event being staged in Pakistan, as it would encourage foreign teams to tour the country in future.

“Very grateful to experience the PSL in Pakistan,” said Amla. “For the last couple of years, I just followed the scores and it was in Dubai. The biggest aspect is international cricket coming back to Pakistan and Pakistan has always been a major role player in cricket, so it was brilliant to experience the wonderful country.”

“It has been really nice to be here again and I hope that PSL goes from strength to strength every year. All the foreign players have really enjoyed it,” he added.

The 36-year-old also revealed the Pakistan players he admired the most while growing up and as competitors.

“Younis Khan, Mohammad Yousaf, Wasim [Akram] and Waqar [Younis] were the guys I watched and thought, Wow! Look at these cricketers,” he said. “It is brilliant to see guys like Wasim Akram and Mushtaq Ahmed now being involved with the PSL teams.”

Finally, Amla reiterated that Pakistan pacer Mohammad Asif was the best bowler he faced in his career.

“Mohammad Asif is the best one [I’ve ever faced],” he said. “His accuracy was amazing. With the new ball, he managed to take the ball away and in, and every ball felt like a question on you that could get you out, so I found him an amazing bowler.”

“Saeed Ajmal was an absolutely brilliant bowler as well, but sometimes you would be able to pick Saeed,’’ he added.