Today is a big day in the HBL Pakistan Super League season V when the two semi-finals will take place here at the Gaddafi Stadium, although in front of empty stands and behind closed doors. 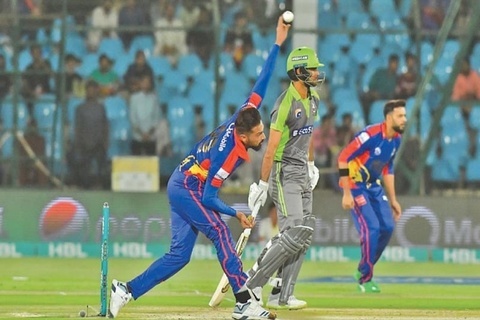 Today is a big day in the HBL Pakistan Super League season V when the two semi-finals will take place at the Gaddafi Stadium, although in front of empty stands and behind closed doors.

Peshawar Zalmi, the most experienced side which has featured in the finals as well as semi-finals in previous seasons, will take on the topmost team Multan Sultans in the first semi-final during the afternoon session while Lahore Qalandars and Karachi Kings will clash with each other in the second semifinal in the evening.

Underdogs Zalmi, led by the experienced Wahab Riaz will be looking to tame high-flying Multan Sultans, who have emerged as leaders on the points table with 14 points, under the command of Test specialist Shan Masood.

Karachi, under the leadership of Imad Wasim, and Lahore led by their captain Sohail Akhtar will play the second semi-final under floodlights starting at 7.00pm.

Interestingly, among the top sides of the previous four editions of the PSL, only Zalmi could make the last four, leaving behind two times champions Islamabad United at the bottom and defending champions Quetta Gladiators at the fifth place. Qalandars and Kings had a bad record in the last four episodes but have made amends and are gearing up for the title this time.


The semifinals will be the test of the abilities of the local players that how they make the semifinals exciting by giving close fight in the absence of a good number of foreign cricketers who have now flown back to their respective home countries amid fears of the fast-spreading coronavirus epidemic.

In the league matches, both Kings and Qalandars scored one win and one loss against each other. Both won their matches at their home turfs. First Qalandars defeated Kings by eight wickets in Lahore due to explosive knock of Ben Dunk, who made undefeated 99 and Sohail Akhtar’s 68.

In the next game, Kings crushed Qalandars in Karachi by ten wickets last week. And if Qalandars will keep their winning record against Kings at home, they will have a perfect chance to play the final on Wednesday.

Kings’ batting line-up is more dependant on top run-getter of the league which is Babar Azam who has aggregated 345 runs and averages 49.28. After losing Alex Hales, who is their second best run-getter, more responsibility comes on the shoulders of opener Sharjeel Khan, Cameron Delport, captain Imad Waim and wicket-keeper batsman Chadwick Walton to excel with the bat.

In bowling, their main hopes are pacer Muhamamd Amir, who has taken 10 wickets, and Chris Jordan, the second best bowler with nine wickets to his credit. Umaid Asif (six wickets) and Imad Wasim have to put up more improved performances.

However, Qalandars will miss their key batsman Chris Lynn and fast bowler David Weise both of whom have returned home. In the bowling department, Qalandars have lethal weapons in pacer Shaheen Shah Afridi (13 wickets at 18.92), Dilbar Hussain (seven wickets at 20.42). Besides that, Patel. Hafeez, Raja Farzan, Haris Rauf and Maaz Khan are also available to strengthen the department.

In the first semifinal, Sultans are tipped as hot favourites against Zalmi. In the league matches, Sultans had defeated Zalmi in both their matches, first by six wickets and then by a close margin of three runs. However, the vast experience of Zalmi of playing the semifinals and finals gives them an edge over Sultans who will be playing first high-pressure match.

But under Shan’s captaincy, they have done a good job in the league stage, so their morale is high. Zalmi are also in trouble after losing a good number of foreign cricketers namely Carlos Brathwiate, Liam Livingstone, Lewis Gregory, Tom Banton and Liam Dawson. However, they now have been joined by Zimbabwean all-rounder Sikandar Raza. But what could be a key factor is that the Sultans have lost two prominent cricketers in Rilee Rossouw and James Vince who have flown back home.

For Zalmi, the batting line-up is strengthened with the availability of Shoaib Malik (239 runs, three fifties), haider Ali (239 runs), and Kamran Akmal (251). Their captain is leading bowler with 11 wickets, followed by Hasan Ali and Rahet Ali, who had grabbed eight wickets each. Yasir Shah is also available as spin bowler.

Meanwhile, while talking to media, Sultans’ captain Shan said the big challenge for his team would be to set a stiff target for Zalmi and to overcome the mistakes they did in the previous matches. Shan said though his two foreign cricketers (Rilee Rossouw, James Vince) were not available, he had a good number of talented local players who had the ability to win matches. He admitted though that Zalmi too had many talented local players besides some good foreign cricketers who could be a handful.

Zalmi skipper Wahab said Tuesday’s match was most important and they would not repeat the mistakes they had made in the previous matches. He said the option was there to include Darren Sammy in the playing XI to use his vast experience.

ICC Elite Panel umpires Aleem Dar of Pakistan and England’s Michael Gough are included in the panel of umpires. Aleem along with another Pakistani prominent umpire Ahsan Raza will act as field umpires in the first semifinals with Shozab Raza (third umpire) and Tariq Rasheed (fourth umpire). Gough with Rashid Riaz will supervise the second semifinals with Asif Yqoob (third umpire) and Faisal Afridi (fourth umpire).

While Anees Sheikh will act as match-referee for the first semifinals, Sri Lankan’s Roshan Mahanama will perform the duty in the second prefinal, as well as in the final on Wednesday.