Defending champions Quetta & two time winners Islamabad are out, while Multan and Lahore make the knockouts for the first time in HBL Pakistan Super League 2020 at National Stadium, Karachi. 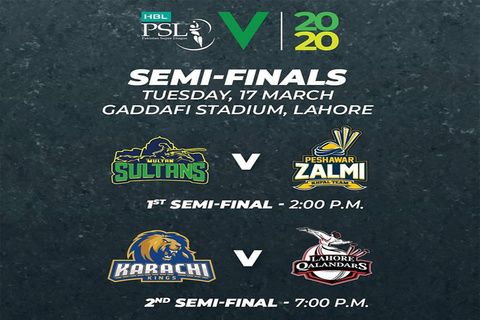 It went down to the 30th and final league match of the HBL Pakistan Super League 2020 before the semi-final line-up was completed.

In the league matches, Sultans defeated Zalmi by six wickets and three runs to lead 2-0 on the head to head this year. In contrast, Kings and Qalandars are even in this edition with Kings avenging an eight-wicket loss in Lahore with a 10-wicket win in Karachi.

Quetta Gladiators were dethroned although they overwhelmed Karachi Kings by five wickets in their last outing of the HBL Pakistan Super League 2020 at National Stadium.

Gladiators’ semi-finals chances had virtually ended after Lahore’s massive nine-wicket triumph over table-toppers Multan Sultans in Lahore earlier in the day.
Gladiators and Peshawar Zalmi finished with nine points each but the latter progressed to the semi-finals due to their better net run-rate. Gladiators needed to chase the 151-run target, set for them by Kings, in only 3.2 overs if they were to make it to the knock-out stage and surpass Zalmi on net run-rate which was virtually impossible.
Powered by superb batting from Khurram Manzoor (63) and Shane Watson (66), Gladiators raced to the 151-run target in 16.2 overs after losing five wickets.
Earlier, Cameron Delport hit a solid 62 off 44 balls to enable Kings to post 150-5. Gladiators had a poor start when left-arm medium-pacer Waqas Maqsood got rid of Ahmed Shehzad (0) off the second delivery of the innings as he edged the left-armer to keeper Mohammad Rizwan.
However, Khurram Manzoor and Watson took the game away from Kings with a 118-run partnership for the second wicket. Khurram, who was removed by Waqas, hammered nine fours and one six in his breezy 40-ball feat. Khurram, playing his first game in the season, hit Ali Khan for four fours in one over.
Skipper Sarfraz Ahmed’s poor form continued as he fell for two when he offered a juicy catch to close-in fielder Walton off Ali Khan. Gladiators were 121-3 in the 13th over. Arshad Iqbal then got rid of Watson and Ben Cutting (0) off two successive deliveries to reduce Gladiators to 139-5. Watson hammered four sixes and seven fours in his 40-ball half-century — his third this season.
However, Azam Khan (12*) and Mohammad Nawaz (8*) scored the rest of runs comfortably. Waqas (2-19) and Arshad (2-37) were the picks of the bowlers.
After opting to bat, Karachi Kings had a poor start when Sharjeel Khan (0) failed to deliver. He was bowled by teenage fast bowling sensation Naseem Shah off the second ball of the innings. The ball was pitched on the off-stump, Sharjeel went for a drive towards onside, but was beaten by the pace and the ball crashed the top of the off-stump.
Iftikhar then joined Babar Azam but he also failed to play a major inning. He was removed by Sohail Khan, caught by Watson, after the Peshawar-born right-hander had hit 17-ball 21 with three fours.
Cameron Delport and Babar rebuilt the innings with a 42-run third-wicket stand before Australian leggie Fawad Ahmed had Babar caught by Mohammad Nawaz at mid-off. Pakistan’s limited-overs skipper went for a big shot but failed to time it properly. Babar hit 34-ball 32, striking three fours.
Chadwick Walton and South African Delport added 73 for the fourth wicket to take their side to a fighting total.
Naseem removed Walton off the last ball of the 19th over for 20-ball 26. He went for a straight drive but could not beat the deep long-on fielder Mohammad Hasnain. Walton hit one six and two fours.
Hasnain then had Delport after the left-hander had hammered two sixes and five fours. Naseem got 2-17 in four overs. Sohail Khan, leggie Fawad Ahmed and Hasnain got one wicket each.
Kings rested their skipper Imad Wasim, Chris Jordan, Umaid Asif and Mohammad Amir and brought in Mohammad Rizwan, Ali Khan, Waqas Maqsood and Umer Khan. The match was supervised by Michael Gough and Rashid Riaz. Ahsan Raza was the television umpire and Faisal Afridi the reserve umpire. Roshan Mahanama was the match referee. Shane Watson was declared the man of the match.