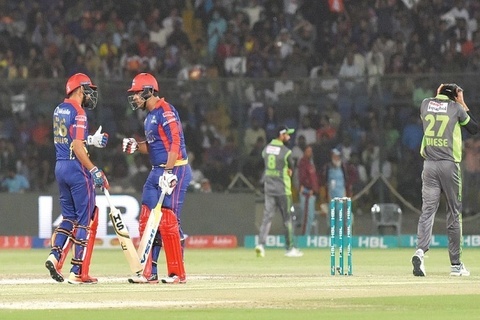 A brilliant, hard-hitting unbeaten opening stand between Babar Azam and Sharjeel Khan helped Karachi Kings extract sweet revenge against arch-rivals Lahore Qalandars by a thumping 10-wicket margin here at the National Stadium Karachi while putting them on verge of qualification for the playoffs of the HBL Pakistan Super League 2020.

In the last fixture played in front of spectators — numbering between 25,000 and 27,000 at the NSK on Thursday — Karachi Kings’ fourth success catapulted them from fifth to second position in the standings and put them level alongside now third-placed Peshawar Zalmi on nine points, but with an extra game still in hand.

Lahore Qalandars, although still fourth in the table, have just Sunday’s afternoon fixture against leaders Multan Sultans to play in what assumed huge importance for them because a loss there as well could end their dream in the league phase for the fifth consecutive season.

Requiring a shade above 7.50 runs an over, Babar and Sharjeel hit up blazing half-centuries to enable Kings to romp home with as many as 17 balls to spare while chasing 151 for victory.

On a pitch that apparently played sluggish upfront on a windy evening, Karachi Kings hardly allowed Lahore Qalandars breaking free after inserting the visitors into bat when Sohail Akhtar made the wrong call at the toss. The captain, in fact, was the only bright spot for the Lahore side by replicating his score of 68 against the same opponents last Sunday in Lahore.


Despite the clampdown on the ardent cricket lovers from Friday onwards, the ones who were in attendance on Thursday must have wished for more big hits than they saw. The entire Lahore innings contained 15 fours and three sixes — the maximums still falling well short of what Dunk alone clobbered as the Australian bludgeoned a record 12 in Lahore — in a team tally of 150-5.

And of those runs, Sohail and Mohammad Hafeez were responsible for the bulk of them — a collective 103 from 71 deliveries — while Dunk could never find the Midas touch which was the hallmark of his sensational show five nights ago.

Coming in at the fall of his Aussie compatriot Chris Lynn, who made five off nine balls before being brilliantly taken at deep midwicket by a tumbling Iftikhar Ahmed in the ninth over, Dunk — who celebrated his 33rd birthday on Wednesday — managed just a solitary boundary before holing out to short fine leg for 14-ball 9. The left-hander’s departure in the 13th literally left the Lahore innings in a state of limbo.

The resultant push for quick runs thereafter was hardly in sight while the final six overs yielded only 42 runs following the departure of Sohail — who struck eight boundaries and a brace of sixes during his 49-ball stay — at the start of the 15th over when the Lahore skipper, sheer desperation than anything else, challenged umpire Ahsan Raza’s leg-before-wicket verdict after playing across the line to a fine delivery from paceman Arshad Iqbal that darted in to beat an attempted short-arm pull.

Hafeez ended up scoring 35 from 22 balls after striking three fours and one six — the 300th of this tournament — but apart from the veteran Pakistan right-hander and Sohail, only Fakhar Zaman (17 off 13, three fours) reached double figures.

Arshad bowled exceedingly well to take 2-15 in three overs with Umaid Asif also picking up a brace on his comeback after being banished following a horrendous return of 0-45 against Islamabad United at the start of the month.

The second half of the match provided a contrasting spectacle as Babar and Sharjeel entertained the departing fans a blend of power-hitting and elegant strokes. Babar played a flurry of gorgeous strokes through the offside and all timed to perfection.

Sharjeel was brutal to say the least. Here was someone who was bent on making an emphatic statement after a run of low scores. Reprieved twice in the same over from the desperately unlucky Haris Rauf, the 30-year-old left-hander kept on flirting with danger whenever he found the ball within his range and brought up his half-century off 40 balls with the aid four fours and leg-side sixes off Dilbar Hussain, Hafeez and Shaheen Shah Afridi.

Sharjeel, who was adjudged man-of-the-match, was a relieved man as trudged off the field with a broad smile on his face with a 59-ball 74, featuring altogether five fours and as many sixes, to his name. Pakistan T20 captain Babar, who scored the winning runs, adorned his 46-ball innings with eight boundaries and one six.