Fakhar Zaman and Chris Lynn struck form at the right time when they stroked sparkling half-centuries as Lahore Qalandars defeated Peshawar Zalmi by five wickets on the penultimate ball of the 24th match of the HBL Pakistan Super League 2020 in front of a packed-to-capacity Gaddafi Stadium on Tuesday. 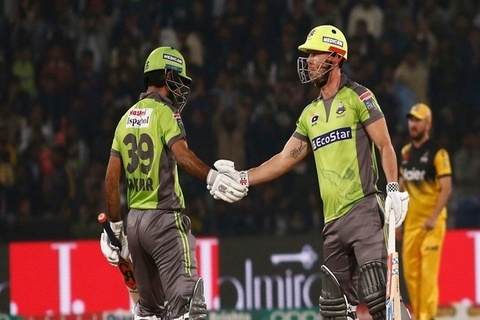 Their stand came after captain Sohail Akhtar (21) had combined with Fakhar, later declared player of the match for his match-winning innings, to provide a 50-run start, before a mix-up ended the former’s innings following a flat and accurate throw by Haider Ali from deep mid-wicket at the striker’s end.

There were late jitters in Qalandars’ run-chase following the dismissals of Lynn, Fakhar, Mohammad Hafeez and Ben Dunk, who departed in a space of 12 balls for 14 runs.

Nevertheless, David Wiese (17 not out) and Samit Patel (11 not out) kept cool heads on their shoulders to help the home side record their fourth win in eight matches.

Qalandars had required 32 off 18 balls, 24 off 12 balls and eight off the last over. After three singles of the first four balls, Wiese’s straight six off Carlos Braithwaite led to tremendous celebrations as another full-house saw a remarkable Qalandars’ run-chase two days after they had chased down 188 to beat Karachi Kings by eight wickets.

Qalandars’ victory has opened up the tournament with second-placed Peshawar Zalmi separated by sixth-placed Quetta Gladiators by three points. Multan Sultans are already assured of a place in the playoffs, as they sit pretty on 11 points from seven matches.

Karachi Kings are fifth with seven points, but have three matches in hand. However, the sides in bother are former champions Islamabad United (seven points from nine matches) and defending champions Quetta Gladiators (six points from eight matches).

Gladiators will meet Multan Sultans at the Gaddafi Stadium in a must-win match on Wednesday, with the game starting at 7pm.

Earlier, Haider Ali and Shoaib Malik put on 116 runs for the fourth wicket to lift Peshawar Zalmi to 187 for seven after they had slipped to 24 for three in 3.2 overs after being sent into bat.

Haider scored a 43-ball 69, his highest score of the tournament to date, with four fours and four sixes, while Shoaib continued his fine form with the bat with an equally impressive 62 from 43 balls with seven fours and two sixes.

The two batsmen matched stroke by stroke as they hit attractive shots to all parts of the field. It was their crafty batting that kept Zalmi in the hunt for a decent score as they collected 97 runs in nine overs after the Powerplay overs had yielded 42 runs for the loss of three wickets. Although the third wicket partnership had laid the foundation for the final assault, Zalmi could manage only 39 runs in the final five overs.

During their innings, both the batsmen also entered the 200-run mark – Haider Ali 238 runs and Shoaib Malik 209 runs – with the 10-batsman list still headed by Islamabad United’s Luke Ronchi (266 runs).

Their partnership ended in the 16th over when Shoaib holed out to Fakhar Zaman at mid-on off David Wiese, while Haider departed 13 balls later when he was caught by Ben Dunk at short fine-leg off Dilbar Hussain.

Qalandars’ decision to bowl first was justified by Shaheen Shah Afridi when he sent back Tom Banton on the second ball, before Samit Patel sent Liam Livingstone back in the hut seven balls later. And when Shaheen Afridi struck again in his second over by dismissing an inform Kamran Akmal, Zalmi were looking down the barrel at 24 for three before they were rescued by the Haider Ali and Shoaib Malik partnership.

Shaheen Shah Afridi finished with impressive figures of 4-0-28-3, which lifted him to second on the bowlers list with 11 wickets, while Samit Patel ended up with two for 37.