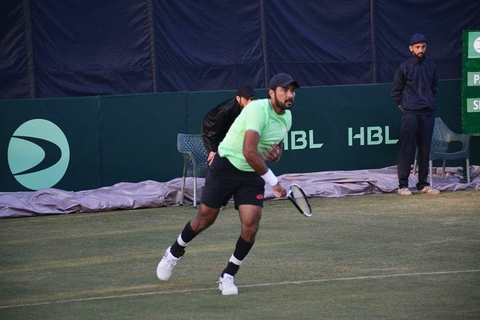 Lahore-born tennis star Aisam ul Haq escapes the scare of defeat as he managed to win the first Davis cup singles match against Slovenia’s Nik Rozborsek by 2-1. The match lasted for 2 hour 25 minutes.

Left handed Nik Rozborsek broke Aisam’s 5th serve to win the opening set at 6-4 as both players held on to their serves in the second which saw the score reaching 4-4 when the match referee stopped play because of excessive dew late Sunday evening.

In a nerve-wrenching third set, it could be anybody’s game as both the players hold their serves and leveled the score to 4-4. Both the players broke back each other’s serves as the score was once again equalized at 6-6.

On tie-break, with some luck and huge support for the Pakistani ace, Aisam showed all his experience to fight back furiously as he broke three consecutive serves of Nik to earned back-to-back five points to clinch 7-6(1) victory out of Nik Rozborsek’s hands and won the first Davis cup rubber to make it 1-0 for Pakistan against Slovenia.

Second match of Men’s singles will be played between Aqeel Khan and Slovenian player Blaz Kavcic.