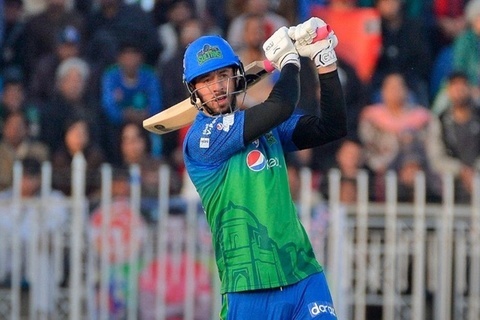 While chasing a target of 92 runs in a match which was reduced to nine overs per side, due to rain, Vince came out all guns blazing and smacked the United bowlers to all parts of the ground. He remained unbeaten 61 runs off 24 balls, an innings which included 11 fours and one six.

Sultans won the match by nine wickets with 14 balls to spare.

At one point, when United were 57/1 in 4.2 overs, it seemed as if the home side would post a total in excess of 100 but Multan spinner, Imran Tahir and Moeen Ali, applied the brakes with wickets of Munro, Shadab and Colin Ingram in quick succession. Tahir claimed two wickets while Moeen bagged one wicket.

Left-arm pacer Junaid Khan also snapped up two wickets including the important scalp of Ronchi, when the latter was threatening to go big in the initial overs.

For his brilliant innings, Vince bagged the award for player of the match.

Multan will play their next match of the tournament against Quetta Gladiators on March 11 at the Gaddafi Stadium in Lahore. Meanwhile Islamabad, after a long break, will lock horns in their final match of the group stage against Karachi Kings at the National Stadium in Karachi on March 14.