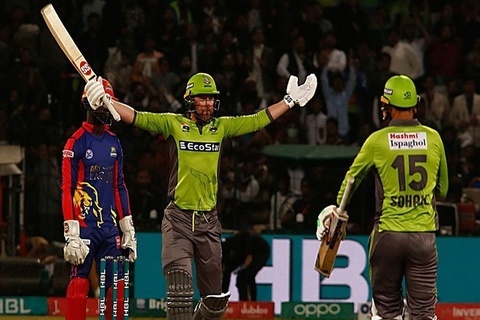 Ben Dunk’s scintillating 99 not out – which included 12 sixes, the most in an HBL PSL innings – spearheaded an eight-wicket win for Lahore Qalandars over arch-rivals Karachi Kings at Gaddafi Stadium on Sunday.

The left-handed batsman crafted the highest third-wicket partnership of 140 with Sohail Akhtar, which helped Qalandars chase down the 188-run target with five balls spare.

Qalandars were dealt with an early blow in their run-chase when Mohammad Amir bowled Fakhar Zaman (0) on the last ball of the first over.

Mohammad Hafeez (16 off 24) was the next batsman to fall as left-arm orthodox Umer Khan removed the veteran all-rounder in the ninth over.

But Dunk, who came out to bat with the scorecard reading 50 for two, turned the match on its head with his immaculate power-hitting.

The left-handed batsman smashed Umer for three sixes in the 13th over and two overs later, in the 16th over, he struck three sixes and a four off Kings’ captain Imad Wasim. Over the course of his 40-ball knock, which also included three fours, Dunk broke his own record for the most number of sixes in an HBL PSL innings, which he had set against Quetta Gladiators at the same venue earlier this week.

With an unbeaten 46-ball 68, Sohail ensured that the runs continued to flow from the other end. The Qalandars’ captain smashed six fours and two sixes.

Earlier, Alex Hales scored a blazing 80 not out from 48 balls, studded with six fours and five sixes, after Kings were put into bat.

He was supported by Chadwick Walton’s quickfire 20-ball 45 – which included two fours and five sixes – as the pair added 93 for the fifth-wicket. Hales and Walton upped the scoring rate in the last five overs as they accumulated 72 runs from 30 balls.

Leg-spinner Maaz Khan was the pick of the bowlers for Qalandars as he returned two for 31.

Qalandars’ Dunk was named man of the match for his extraordinary knock.

The two teams will come face to face in Karachi on 12 March.