Pakistan take on Slovenia in the Davis Cup Asia Oceania playoff starting at the Pakistan Sports Complex on Friday(today) amid inclement weather conditions in the federal capital. 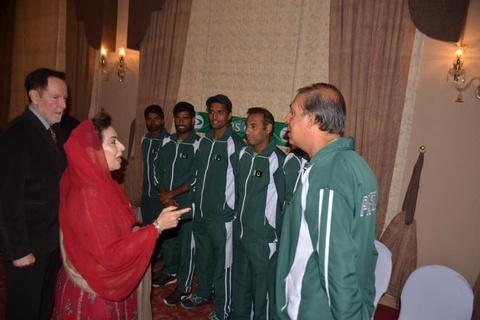 Pakistan take on Slovenia in the Davis Cup Asia Oceania playoff starting at the Pakistan Sports Complex on Friday(today) amid inclement weather conditions in the federal capital.

Meanwhile, the referee said while the weather in the federal capital was unpredictable the tie was most likely to happen on March 6-7. However, he added, in case if the weather was not be suitable for the matches to take place then it could be postponed till March 9.

The minster was speaking at the Meet And Greet event organised at a local hotel for welcoming the Slovenian team besides encouraging the Pakistan players — who were present on the occasion — to give their best performance in the tie.

After the officials greeted the players of both teams, the draws were held in the referee’s presence.

Speaking to Dawn, Pakistan’s non-playing captain Mushaf Zia said that on Friday two singles will be held and ace player will play first singles followed by second to be played by Aqeel Khan. He said all depends on the weather, otherwise, the tie would be postponed till the next day.

The non-playing captain further said that Friday, Saturday were the two main days, but the tie could be shifted on alternate days of Sunday and Monday.

“In case the rains continue, the referee will decide the fate of the tie. It could [also] be postponed,” he said.