Zalmi tame Gladiators for a much needed win 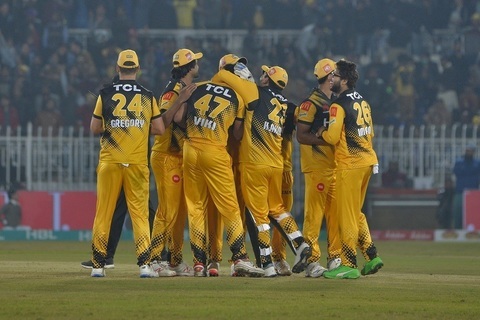 HBL Pakistan Super League 2020      Lahore, Karachi, Rawalpindi, Multan
Shoaib Malik’s second half-century of the season and captain Wahab Riaz’s three-fer handed Peshawar Zalmi a 30-run win over Quetta Gladiators at the Pindi Cricket Stadium on Thursday.
In a contest truncated to 15 overs per innings because of a delayed start due to rain, the 38-year-old smashed a 27-ball 54, playing a crucial role in taking his side’s score to a mammoth 170 for six after Sarfaraz Ahmed, the Quetta Gladiators captain, elected to field first.
Malik crafted a 54-run partnership for the third-wicket with 19-year-old Haider Ali, who made 39 runs from 24 balls with four fours and two sixes, after the dismissals of both openers inside the Powerplay overs – the first five overs for this match.
Zalmi lost Imam-ul-Haq, playing his first match of the season, in the second over and the pressure amplified on the batting side with the dismissal of Kamran Akmal, who scored 23 off 12 balls and struck two fours and two sixes, in the fifth over.
But, the partnership between Malik and Haider followed by Lewis Gregory’s quickfire eight-ball 19 – coming on the back of two sixes – took Zalmi to a daunting total.
Gladiators’ pacer Mohammad Hasnain starred with the ball with four wickets for 34 runs in three overs, the maximum allocation of overs for a bowler for this match.
Gladiators were provided a flying start by the opening pair of Jason Roy and Shane Watson as they accumulated 27 runs in the first two overs.
But, Hasan Ali brought Zalmi back into the contest in the third over of the match by giving away only six runs. In his next over, the fifth of the innings, Hasan put the first dent in the run-chase with the wicket of Watson (19 off 14).
Roy, who made 45 from 26 balls on the back of five fours and two sixes, continued to attack the opposition but failed to get the desired support from the other end as Ahmed Shehzad (10 off 17) struggled to get going. The Englishman was bowled by Yasir Shah on the last ball of the eighth over.
The turning point of the match, however, came in the 11th over. Wahab, the Zalmi skipper, struck on back to back deliveries, accounting for the wickets of Shehzad and Ben Cutting (17 off seven). The left-arm pacer bowled Sarfaraz on the last ball of the 13th over and returned three for 21 in three overs.
Rahat Ali was the other bowler who shone with two wickets for 34 runs, while Hasan and Yasir finished with one wicket each in their accounts.
For his match-defining innings, Malik was named man of the match.
With this win, their third in seven matches, Zalmi have leapfrogged Quetta Gladiators and Karachi Kings to secure third spot with seven points next to their name, while Gladiators slip to the fifth spot with three wins and four defeats from seven matches.
In the next match of the tournament, Multan Sultans will play Karachi Kings at Lahore’s Gaddafi Stadium today.
Scores in brief
Peshawar Zalmi 170-6, 15 overs (Shoaib Malik 54, Haider Ali 39, Kamran Akmal 23; Mohammad Hasnain 4-34)
Quetta Gladiators 140-7, 15 overs (Jason Roy 45; Wahab Riaz 3-21, Rahat Ali 2-34)