The rain forecast during Pakistan’s two-day Davis Cup Asia Oceania playoff tie against Slovenia could be a blow for the hosts because if the tie is shifted from grass court to clay or hard court. 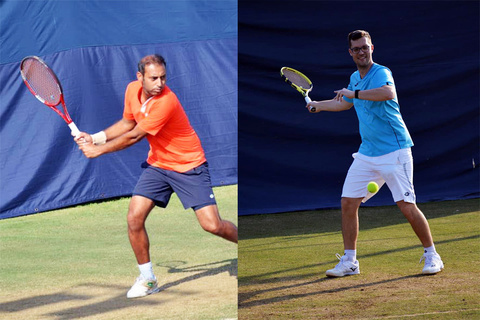 The rain forecast during Pakistan’s two-day Davis Cup Asia Oceania playoff tie against Slovenia could be a blow for the hosts because if the tie is shifted from grass court to clay or hard court, the move may reduce Pakistan’s chances of victory.

This was stated by non-playing captain and coach of Pakistan Davis Cup team Mushaf Zia. He, however, said that in case of rain, the referee can hold the tie on two alternate days. The tie is slated to be held on Friday and Saturday.

“The weather forecast is not encouraging but lets see, in case of light rain, the tie could be held as grass courts are already covered,” he said.

Earlier, the non playing captain accompanied by Davis Cup team comprised of Aisam-ul-Haq, Aqeel Khan, Muzammil Murtaza, Heera Ashiq and Mohammad Abid here at Serena Hotel, said that Pakistan is in an advantageous position against Slovenia since the opponents have little or no experience of playing on grass courts.

Mushaf welcomed the Solvenia team which is first ever European Davis Cup team to visit Pakistan.

“Solvenia’s is a balanced team and tough matches are in the offing during the tie,” he said.

Pakistan’s ace tennis player Aisam-ul-Haq said that he is fully fit for the tie, adding that young players will surelyget their chance to play Davis Cup tie on home soil as it is not easy for him and his long time double partner in Aqeel Khan to play all five matches.

Slovenia teams non playing captain Miha Mlakar along with players said that they are confident about putting up a good show. The visiting non playing captain appreciated the arrangements made by Pakistan for hosting the said tie. It is relevant to note here, Solvenia will be missing word number 61 Aljaz Bedene and world number 141 Blaz Roal for the competition.