Peshawar Zalmi scored an emphatic 16-run win in a rain shortened match of the HBL Pakistan Super League against Lahore Qalandars at the Rawalpindi Cricket Stadium on Friday. 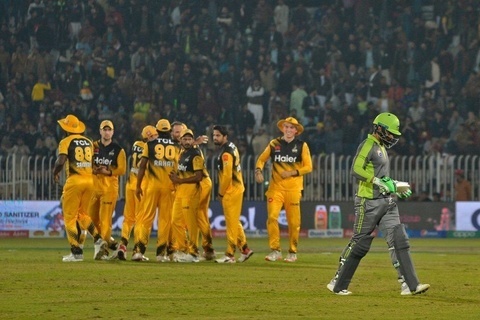 HBL Pakistan Super League 2020      Lahore, Karachi, Rawalpindi, Multan
Peshawar Zalmi scored an emphatic 16-run win in a rain shortened match of the HBL Pakistan Super League against Lahore Qalandars at the Rawalpindi Cricket Stadium on Friday. This was Zalmi’s second win in four games; Qalandars on the other hand remain pointless with their third straight loss in the HBL PSL 2020 edition.
Persistent rain and a wet outfield caused a delayed start, that the shortened game was even staged was also due to untiring efforts of the Rawalpindi ground staff. The match was reduced to 12 over aside.
Qalandars set a 133-run target were restricted by Zalmi to 116 for six. Samit Patel with 34 not out off 15 balls was the top-scorer for Qalandars in their failed chasing effort. Chris Lynn contributed 30 off 15 balls while Fakhar Zaman scored 22.
Man-of-the-match Lewis Gregory with four for 25 off three overs was the pick of the Zalmi bowlers.
Batting first, Zalmi posted 132 for seven in their 12 overs courtesy Haider Ali and Tom Banton’s 34-run each cameos. Banton who opened the innings hit two sixes and four fours off the 15 balls he faced before falling to David Wiese. The teenaged Haider struck four sixes and one four off the 12 balls he faced before becoming one of fast bowler Dilbar Hussain’s four victims.
The right-armer Dilbar bowled with sustained pace and guile to curtail the Zalmi batting onslaught in a three over spell which yielded him four wickets for 24 runs. Wiese took two wickets for 12 runs off his two overs.
Scores in brief
Peshawar Zalmi 132 for 7, 12 overs (Haider Ali 34, Tom Banton 34; Dilbar Hussain 4-24)
Lahore Qalandars 116 for 6, 12 overs (Samit Patel 34, Chris Lynn 30; Lewis Gregory 4-25)