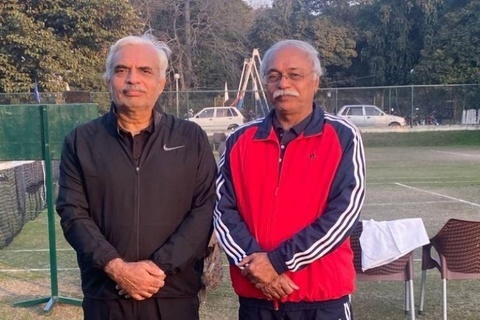 34th Maple Leap Cement Pakistan ITF Seniors World Ranking Tennis Championship 2019      Punjab Tennis Academy, Lahore.
It was a busy day at PLTA courts Lahore, as the finals of different age categories of 34th Maple Leaf Cement Pakistan ITF Seniors World Ranking Tennis Tournament were played where Rao Iftikhar Ahmed & Rai Zahid clinched the men’s 65 plus doubles title while brothers from Lahore Talha & Usama sealed men’s 35 plus doubles title.
The pair of Khurram Khawaja and Asad Niaz was favourite in the men’s 65 plus doubles category. To everyone's surprise, spirited pair of Rao Iftikhar Ahmed and Rai Zahid displayed outstanding tennis skills and techniques during the final and prevailed over opponent in the final to win it by 2-6, 7-5, 10-3 to grab the title.

Their victory was highly lauded by the tennis players present on the occasion and especially by former Davis Cupper and PLTA Secretary Rashid Malik, who applauded their dedication and determination, which was major force behind their sensational triumph.
While in the men’s 35 plus doubles final, brothers from Lahore Talha Waheed (Gas & Oil Pakistan Ltd) and Usama Waheed outpaced the pair of Adeel Ahmed and Mehboob Waheed by 6-3, 6-3 to clinch the title.
It was double delight for Talha Waheed, who, partnering with Muhammad Shakeel, defeated Asher Ali Khan and Fayyaz Khan by 7-6, 7-5 in the men’s 40 plus doubles final to claim another title.
In the men’s 45 plus doubles final, former Davis Cupper, Rashid Malik and Fayyaz Khan played exceptionally against the pair of Asher Ali Khan and Muhammad Shakeel and overpowered them by 6-2, 7-5 to annex the title.
Although Rashid/Fayyaz easily won the first set 6-2, yet they had to struggle hard to overcome their opponents by 7-5. In the men’s 70 plus singles final, Pervaiz Bajwa had to struggle hard to beat Naveed Najam by 6-3, 4-6, 6-4 to grab the title.
The finals of some the major categories will be played today (Friday) at 2:30 pm at the PLTA courts while Secretary Sports Ehsan Bhutta will grace the concluding ceremony as chief guest. Other notables who will be present at the concluding ceremony will be PLTA Chairman Rao Iftikhar Ahmad, Secretary Rashid Malik, PLTA officials, players and their families.