Eight more matches were decided in the 34th edition of Maple Leaf ITF Tennis Championships 2019, all of them being straight set victories at PLTA courts, Lahore. 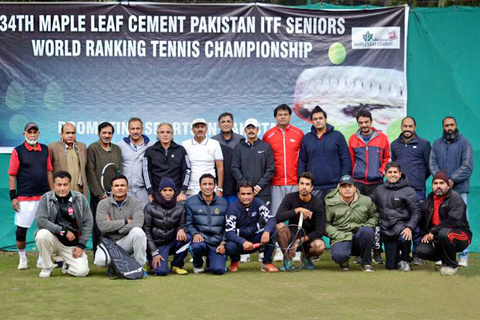 In the men’s singles 35 plus final, Zohaib Raza was up against spirited Usama Waheed. He was in good form and played superb tennis to win the first set by 6-4. In the second set, Zohaib played better tennis and overpowered his opponent by conceding just three games as he won the second set 6-3, registering an impressive title triumph against Usama Waheed.

In the men’s 35 plus doubles, Usama Waheed and Talha Waheed (Gas & Oil Pakistan Ltd) outclassed the pair of Hussain Quershi and Waqas Ahmad Butt with a score of 6-1, 6-1. In another match of the same category, Adeel Ahmad Khan and Mehboob Waheed played well against Amir Ijaz Akbar and Muhammad Yousaf and outperformed them by 6-3, 6-2.

It was double delight for Talha Waheed (Gas & Oil Pakistan) as he, partnering with Muhammad Shakeel, overpowered the pair of Faiz Hassan and Hasan Said by 6-0, 6-2 in the men’s 40 plus doubles while in another match of the same category, Ashar Ali Khan and Fayyaz Khan trounced Hussain Qureshi and Waqas Ahmad Butt by 6-0, 6-1.

In men’s doubles 45 plus, Fayaz Khan and Rashid Malik (ZTBL) thumped the pair of Faiz Hassan and Mehboob Waheed by 6-3, 6-2 while Ashar Ali Khan and Muhammad Shakeel toppled Nadeem Abbas and Hasan Said by 6-1, 6-1. In the men’s 65 plus doubles, Rai Zahid and Rao Iftikhar Ahmad outscored Muhammad Saeed Ikram and Naveed Najam by 6-1, 6-1.

PLTA Secretary and former Davis Cupper Rashid Malik has said that the ITF Seniors is conducted every year by the PLTA at the same venue and it is participated enthusiastically by the top senior players of the country. Such a great participation by senior players, who are fathers and grandfathers of future tennis players, inspires their sons and grandsons to play and adopt this beautiful game professionally.

“Seeing their elders in action convince them to continue this legacy and earn great name for their families as well as for their country. Hopefully, with the conduct of such tournaments, we will get more promising and talented players, who will be future tennis stars with hard work and dedication,” Malik added.