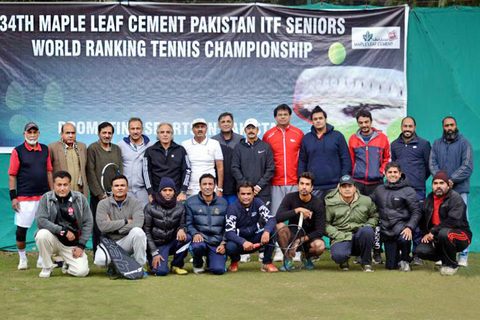 Ghazanfar won against Muhammad Babar with the final score line of 4-6, 6-4, 7-6 in the 60-plus singles final. Earlier, Ghazanfar Ali beat Mobeen Malik 6-0, 6-1, while Muhammad Babar got bye.
Asad didn't allow Muhammad Saeed to score any point as he smashed Saeed in 65-plus singles final. The final score line was 6-0, 6-0. The 70-plus singles final will be played today (1st January) between Najam Naveed and Pervez Bajwa.
In 35 plus men’s singles, Zohaib Raza edged out Mehboob Waheed by 3-6, 6-1, 7-6 while in the second match of this category, Usama Waheed got walk over against Haider Khan. In the 35 plus men’s doubles, Usama Waheed and Talha Waheed (Gas & Oil) outscored Humayon Rana and Zohaib Raza by 6-1, 6-1. In 60 plus men’s singles, Ghahzanfar Ali played well against M Babar and defeated his opponent by 6-4, 6-4 while in 65 plus men’s singles, Asad Niaz overwhelmed M Saeed Ikram by 6-0, 6-0.
In 45 plus men’s singles, Rashid Mailk of ZTBL was up against Sajjad Rasool of Aitchison College. Malik was in sublime form and played superb tennis to outpace his spirited opponent Sajjad by 6-2, 6-2 to move into the next round. In another match of this category, Hassan Saeed overpowered struggling Fayyaz Khan by 6-2, 6-0.
In 40 plus men’s singles, Talha Waheed (Gas and Oil Pakistan Ltd) outperformed Humayon Rana 6-1, 6-4. Talha started the first set in great style and put his opponent under tremendous pressure to win the set 6-1. In the second set, Talha had to struggle a bit hard to overcome his spirited opponent by 6-4. In the second match of the same category, Shehryar Salamat had to struggle hard to beat M Shakeel 6-1, 5-7, 6-4.
PLTA Secretary and former Davis Cupper Rashid Malik graced the colorful opening ceremony as chief guest and formally inaugurated the event. A good number of players, their families and tennis lovers were also present on the occasion.