Umar Akmal's double-century on the third day in the final of the first-class Quaid-e-Azam Trophy tournament against Northern at Karachi’s National Stadium set up a victory push for Central Punjab. 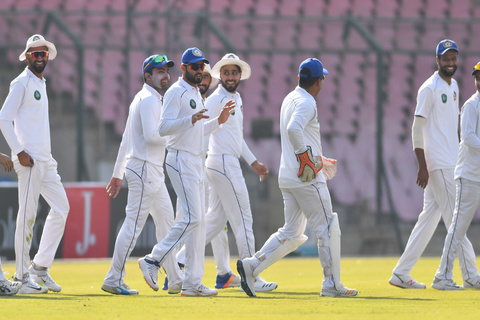 Quaid-e-Azam Trophy 2019/20      NBP Stadium, UBL Sports Complex, National Stadium
Central Punjab’s Umar Akmal recorded his second double-century in first-class cricket on day three of the final of the first-class Quaid-e-Azam Trophy tournament against Northern at Karachi’s National Stadium.
The middle-order batsman made 218 runs from 265 balls, adding 95 runs to his overnight score on Sunday.
He cracked a total of 20 fours and eight sixes in an innings which played a vital role in helping his side pile up a 421-run first innings lead. Central Punjab declared on 675 for eight.
Umar got the desired assistance from Zafar Gohar, who fell just one run short of what would have been his career’s second century at this level, at the other end.
The bowling all-rounder scored 99 from 168 balls, hitting 12 fours and two sixes, as the pair stitched a solid 215-run partnership for the sixth-wicket before Zafar was dismissed off Faizan Riaz’s bowling.
For Northern, Nauman Ali, Mohammad Musa and Faizan picked up two wickets each.
Northern, in their second innings, were 109 for two when stumps were drawn.
Nineteen-year-old Haider Ali was the star performer with his unbeaten 50. The young opener crafted a 75-run opening partnership with Zeeshan Malik, who scored 38, hitting six fours, before falling to Bilal Asif.
Haider has struck seven fours in the 113 balls he has faced to date and he will be joined by Faizan Riaz at the other end when the play resumes on Monday. The two have a daunting task of surmounting the 312-run trail to avoid an innings defeat.
Umar Amin (17) was the other batsman to fall as he nicked Faheem Ashraf, who took five wickets in the previous innings, to be caught behind.