Pakistan defeated Sri Lanka by 263 in the second test match at National Stadium, Karachi to seal the two match series 1-0 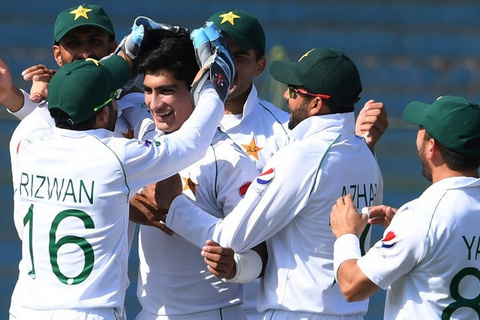 Pakistan needed a mere 16 balls to wrap-up a comprehensive 263-run win against Sri Lanka on the fifth and final day of the second Test match of the ICC World Test Championship at the National Stadium, Karachi on Monday. The hosts won the two-match series 1-0, the first Test of the series ended in a draw in Rawalpindi last week.

Teenager Naseem Shah recorded the first five-wicket haul of his career in only his third Test to spearhead the resounding victory. Resuming at the overnight score of 212 for seven, Sri Lanka lost Lasith Embuldeniya on the first ball of the day to a searing bouncer bowled by Naseem with wicketkeeper Mohammad Rizwan taking an easy catch.

Yasir Shah made the big breakthrough in the next over, centurion Oshada Fernando was caught by Asad Shafiq in the slips without addition to his overnight score of 102. The match ended in the next over when Naseem trapped Vishwa Fernando lbw for a duck.

The victory earned Pakistan 60 points; they now have a total of 80 points after four ICC World Test Championship Test matches.