Pakistan on the brink of victory after fourth day heroics

The fourth day of the second test match between Pakistan and Sri Lanka ended with Pakistan in complete control and needing only three wickets on the final day to seal their first test home win in over a decade at National Stadium, Karachi. 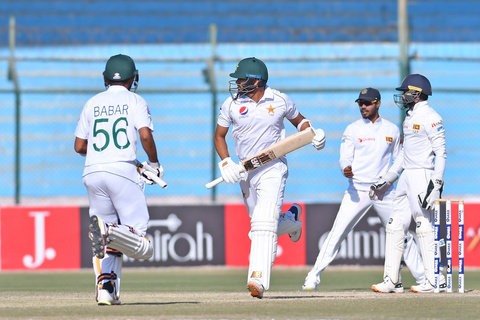 Osaka Batteries Cup Pakistan vs Sri Lanka Test Series 2019      Rawalpindi Cricket Stadium/National Stadium, Karachi.
Pakistan enjoyed a near-perfect day-four of the ICC World Test Championship series match against Sri Lanka at the National Stadium in Karachi on Sunday leaving them a mere three wickets away from a series win.
Chasing 476 for a win, Sri Lanka were left reeling at 212 for seven at close of play as Pakistan bowlers led by Naseem Shah’s three for 31 derailed the visitors’ hopes in the second innings.
Oshada Fernando was the only one to provide sustained resistance to the impressive Pakistan attack remaining unbeaten on 102 off 175 balls (13 fours) when stumps were drawn for the day.
Fernando added 104 runs for the sixth wicket with wicketkeeper Niroshan Dickwella who was dismissed shortly before close for 65 (76 balls, 11 fours).
Sri Lanka then lost Dilruwan Perera on the first ball of the last over of the day for five runs; he became Naseem’s third victim of the day.
Apart from Naseem, Shaheen Shah Afridi, Mohammad Abbas, Yasir Shah and Haris Sohail shared a wicket apiece.
Earlier, a record breaking batting performance by Pakistan’s top-four batsmen helped the hosts amass 555 for three in their second innings.
Captain Azhar Ali and Babar Azam followed openers Abid Ali and Shan Masood past the three-figure mark with brisk centuries in the first session of play which saw the hosts add 160 runs in only 26 overs.
Azhar reached his 100 off 142 balls with the help of 11 fours, he was dismissed for 118 by Lasith Embuldeniya, this was the lone success for the left-arm-spinner in the innings, he conceded 193 runs in 50 overs.
Babar scored the fourth century of his career (third in last four Tests), the elegant stroke-maker hit seven fours and one six and reached the three-figure mark off 131 balls.
Pakistan declared the innings at lunch, setting Sri Lanka a 476-run target before Pakistan's bowlers took control of the game.