A 278 run opening stand between Abid Ali and Shan Masood helped Pakistan take 315 run lead in the second innings of the second test match being played at National Stadium, Karachi. 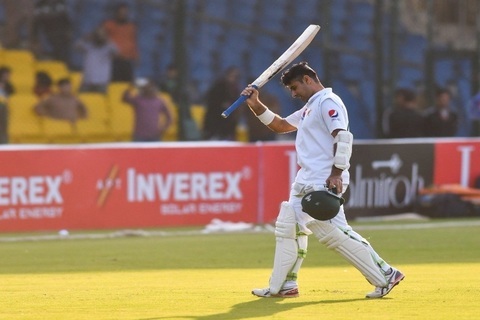 Osaka Batteries Cup Pakistan vs Sri Lanka Test Series 2019      Rawalpindi Cricket Stadium/National Stadium, Karachi.
Centuries by openers Shan Masood and Abid Ali in the second-best opening stand in Pakistan Test history gave the hosts control of the second ICC Test Championship match against Sri Lanka on day-three (Saturday) of the match being played at Karachi’s National Stadium.
Resuming at the overnight score of 57 for no loss, Abid and Shan took control of the proceedings after surviving few anxious moments at the start of the day. The pair adopted an attacking approach post the first half-hour of the day’s play as Sri Lanka were forced on the back foot.
Abid reached his 50 off 70 balls and reached 93 at lunch with Shan unbeaten on 78 having taken 85 balls to reach his 50, 118 runs were added in 26 overs of the first session of play with Pakistan 175 without loss.
Abid reached his second consecutive century off 137 balls (14 fours, one six), becoming the first Pakistan player to score centuries in the first two Tests of his career.
Shan followed Abid to the three-figure mark; this was Shan’s second century in his 19 match Test career. The left-hander reached his century off 148 balls (six fours, two sixes). The partnership reached 200 runs off 278 balls. The alliance was finally broken minutes before tea interval; Shan was dismissed by fast bowler Lahiru Kumara for a 198-ball 135, he hit seven fours and three sixes in his innings.
The 278-run first wicket partnership was the second best in Pakistan’s Test history behind Ijaz Ahmed and Aamir Sohail’s 298 run stand against West Indies at the same venue in 1997.
Abid added 77 runs for the third wicket with Azhar Ali before he was dismissed by Kumara for 174 off 281 balls, his knock included 21 fours and one six. Azhar reached his half-century off 82 balls and was unbeaten on 57 when stumps were drawn; Babar Azam was not out on 22 off 42 balls.
Pakistan closed the day at an imposing 395 for two having added 338 runs in the day for the loss of two wickets, they lead by 315 runs and have eight second wickets intact, two more days are left in the match.