Pakistan storms back against Sri Lanka on the second day

Abid Ali and Shan Masood made a solid start in the second innings after Shaheen's five fer restricted Sri Lanka to 271 on the second day of the second test between the two sides in Karachi. 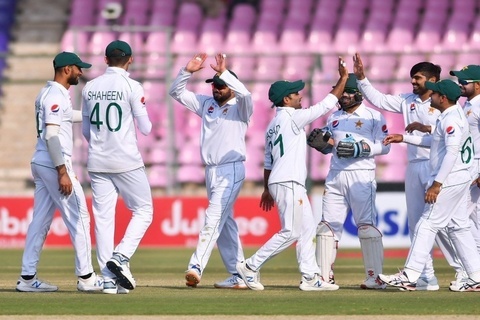 Osaka Batteries Cup Pakistan vs Sri Lanka Test Series 2019      Rawalpindi Cricket Stadium/National Stadium, Karachi.
The Pakistan-Sri Lanka ICC Test Championship series Test match being played at the National Stadium, Karachi is poised for a thrilling finish as Pakistan ended day-two (Friday) 57 for no loss in their second innings, 23-run behind Sri Lanka’s first innings score of 271 in reply to Pakistan’s first inning score of 191.
Resuming their first innings at the overnight score of 64 for three, Sri Lanka were rocked by two early wickets on Friday as night-watchman Lasith Embuldeniya (13) and Angelo Mathews (13) fell to Mohammad Abbas and Shaheen Shah Afridi respectively.
Sri Lanka were tottering at 80 for five at this stage, Dinesh Chandimal was joined by first Test centurion Dhananjaya de Silva, the two added 67 runs for the sixth wicket before de Silva was dismissed by Shaheen with Abbas taking a fine catch at deep fine-leg off a top-edged pull shot.
Chandimal held the Sri Lankan innings together with a 74-run knock off 143 balls which included 10 fours. He was dismissed by Haris Sohail with Shan Masood taking the catch.
Dilruwan Perera resisted Pakistan bowling attack with a resolute 48 off 84 balls which included six fours and one six.
Pakistan eventually dismissed Sri Lanka for 271 runs with Shaheen taking the first five-wicket haul of his Test career. The left-armer playing his seventh Test ended with figures of five for 77 runs in 26.5 overs.
Abbas finished with four for 55 in 27 overs. Pakistan openers Abid Ali (32 off 42 balls, four fours) and Shan Masood (21 off 42 balls, two fours) then brought the hosts right back in contention with an unbroken opening partnership of 57 runs in 14 overs.
Pakistan will begin the third-day on Saturday, 23 runs in arrears and will be hoping to build a big target for the visitors who need to bat last on a pitch expected to offer further help to both pacers and spinners with bounce variation and turn especially on day four and five.