Abid Ali scored a historic hundred and Babar Azam added another century to his name in test cricket as the first test between Pakistan and Sri Lanka ended in a draw at Rawalpindi Cricket Stadium. 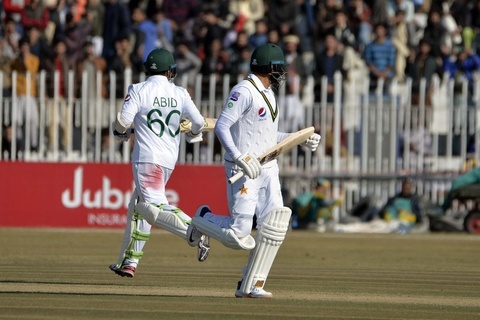 Osaka Batteries Cup Pakistan vs Sri Lanka Test Series 2019      Rawalpindi Cricket Stadium/National Stadium, Karachi.
Debutant opener Abid Ali created history as he scored an unbeaten 109 to become the first male cricketer to score a century on both Test and ODI debuts as the first ICC Test World Championship series match between Pakistan and Sri Lanka ended in a draw at the Rawalpindi Cricket Stadium, Rawalpindi on Sunday.
Abid also became the 12th test batsman from Pakistan to score a century on debut after Javed Miandad 163, Saleem Malik 100*, Mohammad Wasim 109*, Ali Naqvi 115, Azhar Mahmood 128*, Younis Khan 107, Taufeeq Umar 104, Yasir Hameed 170 and 105, Fawad Alam 168, Umar Akmal 129.
There was plenty to cheer for the impassioned cricket fans gathered on day-five as the rain marred Test came to life with the Abid and Babar Azam’s brilliant batting after Sri Lanka declared their first innings on 308 for six shortly after Dhananjaya de Silva completed his sixth Test century.
De Silva scored 102 not out off 166 balls with the help of 15 fours as the visitors added 26 runs to their overnight score of 282 for six in the five overs and one ball they received before declaring their first innings.
Pakistan lost opener Shan Masood for a zero in reply, captain Azhar Ali joined hands with Abid to add 87 runs for the second wicket before Azhar perished to fast bowler Lahiru Kumara for 36.
Babar Azam continued his rich vein of form and peeled off a typically pleasing century as Abid and he dominated the last session of play with some dazzling stroke play.
Babar was unbeaten on 102 off 128 balls (14 fours) when stumps were drawn for the last time in the Test. This was Babar’s third Test century.
Abid who had scored 112 on his ODI debut against Australia in Dubai earlier in the year, reached his century off 183 balls, he remained unbeaten on 109 off 201 balls (11 fours) when the match ended. Abid, in the process, became the 12th Pakistan batsman to score a century on Test debut.
Babar Azam and Abid Ali added 162 runs for the unbeaten third wicket partnership.

The second and final Test of the series begins at Karachi’s National Stadium from Thursday, 19 December.