5.2 overs bowled on the third day of first test match between Pakistan and Sri Lanka

Overnight rain and overcast skies ensured that only 5.2 overs were possible of the third day of the first test match between Pakistan and Sri Lanka at Rawalpindi cricket stadium. 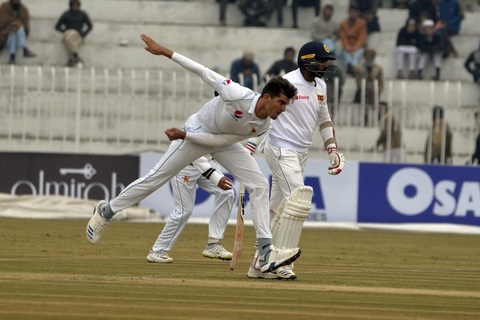 Osaka Batteries Cup Pakistan vs Sri Lanka Test Series 2019      Rawalpindi Cricket Stadium/National Stadium, Karachi.
Only 5.2 overs were possible on the third day as rain and overcast conditions resulted in an early close of play on the third day of the first test match between Pakistan and Sri Lanka at Rawalpindi Cricket Stadium.
Play was not possible at all in the first session of the day as overnight rain had left the ground unfit for play.
The players took extended lunch with Sri Lanka still at 263 for 6.
Play resumed in the second session but only 5.2 overs were possible before umpires Michael Gough and Richard Kettleborough decided that the light was unfit for play even with all the stadium lights on.
By the time the play was called off, Sri Lanka had added 19 runs to their total without taking further damage in the wickets column.
Dhananjaya de Silva remained not out  on 87 and was joined by Diruwan Perera on 6 at close of play.
Shaheen Afridi and Naseem Shah took a crack at the opposition during the small period of play, often troubling the two batsmen, but could not find the breakthrough.
With rain threatening to return tomorrow, a draw is the most likely scenario left for the two sides who will look to seal the series in the second test which is to take place in Karachi.