Dark skies and rain forced an early close of play on the second day of the first test between Pakistan and Sri Lanka at Rawalpindi cricket stadium. 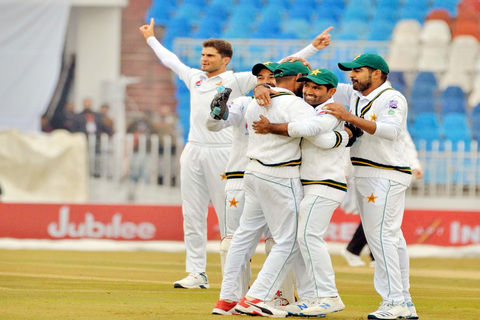 Rain and bad light brought an early close to the second day of the first test match between Pakistan and Sri Lanka at Rawalpindi cricket stadium after Sri Lankan batsmen held their ground against a skillful bowling display.

Resuming at 202-5, Sri Lanka had reached 222-5 on the second morning before the umpires stopped play as rain started to pour heavily at the Rawalpindi stadium.
Only 7.5 overs could be bowled before the rain interruption as Sri Lanka took lunch with Dhananjaya de Silva unbeaten on 54, his sixth half-century, while Niroshan Dickwella was on 15 having resumed his innings on 11.
The brief period of play was not without incident as 16-year-old pacer Naseem Shah had de Silva caught behind by wicketkeeper Mohammad Rizwan, but the third umpire Richard Illingworth ruled the ball had bounced.
The post lunch session belonged to Sri Lanka as Dickwella and de Silva resisted Pakistani seamers. The two managed to stitch together 67 runs for the sixth wicket.
Shaheen once again broke a budding partnership when he had Dickwella caught by Babar Azam at slip for 33 runs.
Dhananjaya de Silva remained steadfast in his approach and remained not out till the light was not deemed fit enough for play by the umpires. After a long wait, the play was called off for the day with de Silva on 72 and Dilruwan Perera still at the crease for 2.