Pakistan clawed their way back into the game after Sri Lanka started strongly on day 1 of the first test match between the two sides at Rawalpindi Cricket Stadium. 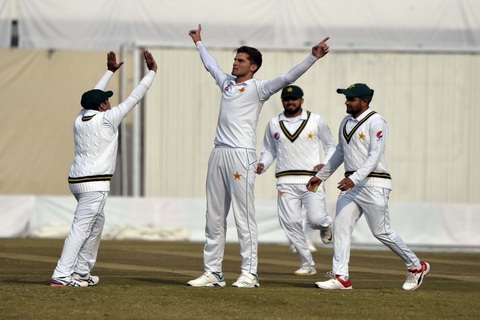 Pakistan fought back against Sri Lanka after their strong start as bad light cut short the first day of the first test match between the two sides at Rawalpindi National Stadium.

Choosing to bat after winning the toss with overcast conditions, no one was expecting a strong start from the visiting Sri Lankan team.

Their decision paid dividends as the opening pair of captain, Dimuth Kuranaratne and Oshada Fernando batted diligently against Pakistan's all pace attack. With little help from the wicket, Pakistani bowlers found it hard to trouble the batting pair as they went wicketless against Sri Lanka in the first session at 89 for 0.

The break gave Pakistan time to change their strategy as they emerged from lunch full of vim and vigor.

Shaheen Shah Afridi was soon rewarded for his efforts as he trapped left handed Kuranaratne LBW on 59 ending the opening partnership on 96.

Pakistan had the upper hand after the first wicket fell as Naseem Shah, Usman Shinwari and Muhammad Abbas struck in quick succession to leave Sri Lanka 4 down for 127.

The vastly experienced Angelo Mathews and Dhananjaya de Silva stabilized the flat-lining innings by adding 62 runs for the fifth wicket before Naseem Shah found Mathews' outside edge on a lose drive which was snared by Asad Shafiq at slip with a reflex effort.

Dickwella and de Silva were still at the crease when bad light brought an early close to the day.