Shahzaib Rindh lost his final bout to settle for the silver in Wushu competition at 13th South Asian Games which are being held in Kathmandu and Pokhara, Nepal. 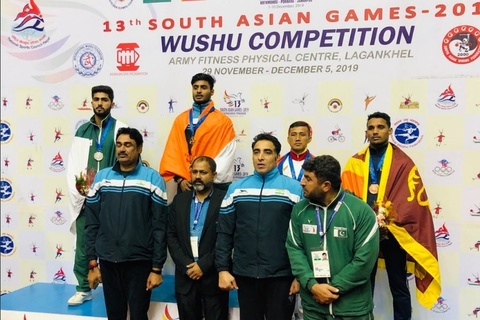 Shahzaib booked his semi-final spot in -70 KG weight class, by defeating an opponent from Sri Lanka but unfortunately lost his final bout against an Indian counterpart to settle for the silver.

“We expect a couple of sure gold.”

The South Asian Games is a biennial multi-sport event held among the athletes from South Asia by governing body of these games: South Asia Olympic Council (SAOC). At present, SAG 2019 are joined by seven members namely Bangladesh, Bhutan, India, the Maldives, Nepal, Pakistan, and Sri Lanka.
The 2019 South Asian Games are featuring a total of 27 sports where Pakistan have fielded its players in 20 different sports.