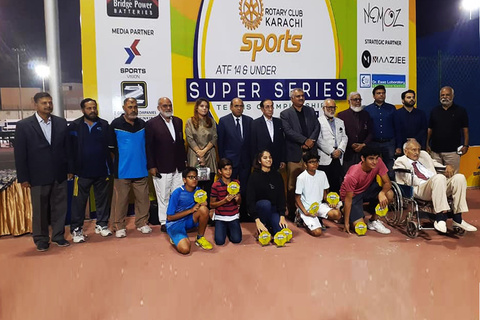 Rotary Club Karachi (Sports) - ATF 14 & Under Super Series Tennis Championships ( Leg 2)      Defence Authority Creek Club
Rotary Club Karachi (Sports) ATF U-14 Super Series Tennis Championship 2019 wrapped up successfully at the DA Creek Club, Karachi.
Talented Ashar Mir, like he's done so many times in his career, again came through with a big rally, this time to seal boy's singles and doubles's title.
In the first set of doubles, Ashar Mir pairing with Ahmed Nael Qureshi of Islamabad displayed quality tennis and did not allow their opponents to  settle down with their powerful strokes from the base line. Ashar and Nael won the first set without conceding a single game by 6-0. In the second set, the score went up to 3-3 all as players held their respective service.
Ashar-Nael then built up a lead of 5-3 and won the second set at 6-4 by holding their own service with the help of two aces. The match lasted for one hour 10 minutes and was officiated by Aftab Hussain.