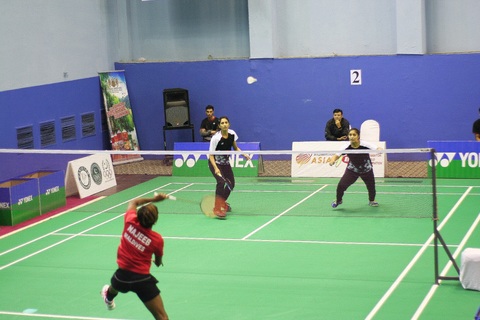 YONEX SUNRISE Pakistan International Series 2019      Pakistan Sports Complex, Islamabad
Women keep title hopes alive for Pakistan as men fall in the semifials of both Singles and Doubles.
Mahoor Shahzad of Pakistan managed to make it to the finals of both women's singles and doubles events. Mahoor comfortable defeated Neela Najeeb in singles competition with a score of 21-18 and 21-11. The women's doubles match was a tough ride of the Pakistani pair of Mahoor and Bushra Qayyum where they were up against Neela Najeeb and Maisa Fathuhullah Ismail of Maldives. The Pakistani pair won the first game by 21-17 but lost the next with a wide margin of 11-21. The 3rd game was a close call as the scores were tightly matched by both sides but the pair of Mahoor and Bushra prevailed in the last stages of the game to win it by 21-18 to meet twin sisters from Maldives in the final.

Mahoor and Bushra are the sole representatives of Pakistan in the finals of the Yonex Sunrise Pakistan International Series 2019.
In the other womens's singles semi finals, Pakistan's Palwasha Bashir fell to the number one seed Soraya Aghaeihajiagha of Iran in straight games.


Men's Singles:
In the semifinals of the men's competition, the number six seed Saran Jamsri of Thailand beat Awais Zahid in three highly competitive games to advance to the finals. Awais started the semi final on a positive note as he was leading the game initially at 10-7 but his Thai opponent came back to level at 11-11 and finally winning the game by 21-17. Awais made an amazing comeback in the second game where he was trailing 4-11 at one stage to win the 2nd game by 18-21. The decider proved pretty much a one sided affair as Saran Jamsri played aggressively from the very start and maintained a decent lead throughout to book his spot in the final with the 4th seed Georges Julien PAUL of Mauritius, who defeated Howard Shu of America in three sets as well.