Islamabad Football Association B-Division continues after it was affected by rain last week. 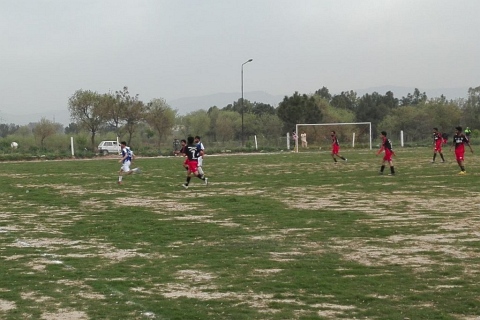 On 23rd march, 2016, 4 matches were decided. Model Town Fc defeated Royal players FC by 4-3 to to make a strong contender to qualify for the A-league. Hamza scored a brilliant hat-rick for Model town to help his side defeat decent Royal Players FC. Islam scored opne goal for Royal player FC while two goals were own goal due to errors by Model Town Fc defenders.

In other match Jinnah Fc defeated Elite FC by 1-0. Shoaib Butt scored the only goal of the match to clinch a tight fought battle between the two sides.

Bolan Fc continues their winning run by defeating PEF Chasers by a decent scoreline of 2-0 in the third match of the day. Hassan and Waseem scored one goal each to help their side win the match.

Capital youth Fc were awarded a walkover and a score of 3-0 were awarded to them in the last match of the day,

On 24th March, two main matches were played. In first match Haidery Fc showed outstanding performance by defeating United FC 4-1. Umair, Asif Ullah, Faisal Khan, Mushtaq Khan scored one goal each to to finish the pool matches. They finished at the top of the table and qualified for IFA A-Division Football league.

At Quaid E Azam FC football ground G-8/4, Friends FC were awarded a walkover over PTCL Youth FC and a scoreline of 3-0 were awarded to them.

The IFA-B Division is a great step by IFA to promote football in the city of Islamabad. This will help to produce some exceptional football talents that may help to increase the level of football in Pakistan.