Northern became the first team to qualify for the final of National T20 Cup 2019/20 by beating a spirited Khyber Pakhtunkhwa side by 3 runs despite a superb performance by Usman Shinwari. 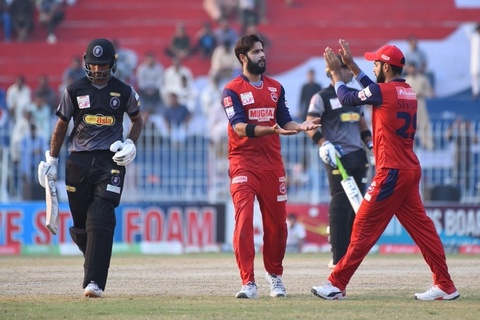 Put into bat the Northern team was held to a modest total of 148 thanks a bowling masterclass from left arm pacer Usman Shinwari who took five wickets and conceded only 13 runs from his four overs.

Umar Amin top scored for the Nothern side who were put into bat by Khyber Pakhtunkhwa captain Mohammad Rizwan.

In reply the team of Khyber Pakhtunkhwa seem to be cruising towards the target as Fakhar Zaman and Iftikhar Ahmed guided the chase with 39 and 53 runs respectively.

But the spinners kept Northern in the contest and the game came down to the final over where Khyber Pakhtunkhwa needed just 8 runs with 6 wickets in hand.

Haris Rauf bowled the over of his life conceding just three runs from the over and picking up three wickets from the six deliveries ton ensure his teams place in the final of the National T20 Cup.

Northern will play the winners of the second semi final for the championship honours tomorrow.