Southern Punjab needed Wahab Riaz to rescue them once again with the bat as they managed to beat Sindh by 34 runs in the only game of the day in the ongoing National T20 Cup 2019/20 being played at Iqbal Stadium in Faisalabad. 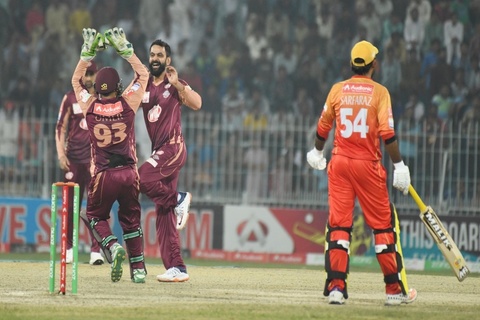 Audionic Presents Zong 4G National T20 Cup      Iqbal Stadium
Southern Punjab beat Sindh by 34 runs to stay alive in the ongoing National T20 Cup at Faisalabad’s Iqbal Stadium.
Southern Punjab lost both openers in the very first over after opting to bat first. Sohail Khan wrecked havoc in the first over removing the captain Shan Masood and Mohammad Hafeez.
Sohail struck again in his second over to reduce the batting side to four for three in 2.1 overs.
A 30-ball 41 by Wahab Riaz, who batted at number three, weathered the storm. The 34-year-old cracked three fours and two sixes and crafted a 73-run stand for the fourth-wicket with veteran all-rounder Shoaib Malik - who scored 38 runs from 41 balls, hitting three fours and a six.
Late bursts by Aamer Yamin and Bilawal Bhatti helped Southern Punjab post a respectable score of 148 for nine in 20 overs.
For Sindh, Sohail Khan finished with 4 wickets for just 15 runs.
Sindh did not enjoy the best of starts as well. Khurram Manzoor and Ahsan Ali were back in the pavilion inside the first 10 balls of the run chase.
A 63-run stand for the third-wicket between Asad Shafiq, who scored run-a-ball 25, and Sarfaraz Ahmed (45 off 37) gave Sindh a hope.
The fall of Asad’s wicket in the 10th over handed complete control of the match to Southern Punjab as Hafeez and Zahid Mahmood picked up four wickets each to skittle Sindh for 114 in 17.4 overs.
For his four for 24 in four overs, Hafeez bagged the man-of-the-match award.
With this match, both, Southern Punjab and Sindh, have completed their all group matches.
After the 13th match of the National T20 Cup, Southern Punjab, with five points, are placed third on the points table, while Sindh are fourth with four points.