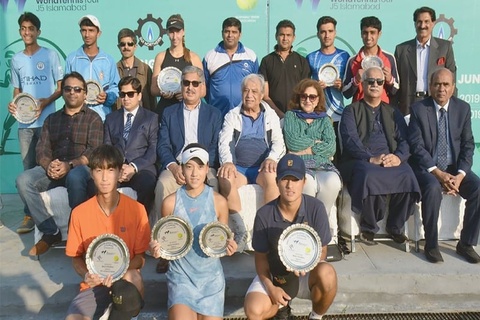 ITF Pakistan Junior Tennis Championships 2019 (II)      Dilawar Abbas PTF Complex
Second seed Huzaifa Abdul Rehman of Pakistan and top seed Aysegul Mert of Turkey clinched the boys and girls singles titles of the ITF Pakistan Junior World Ranking Tennis Championships here at the S. Dilawar Abbas PTF Complex, Islamabad.
In an exciting boys final, the 16-year-old Huzaifa took a 4-0 lead against compatriot Shoaib Khan, seeded six, by breaking the second and fourth game of the first set. Shoaib broke the fifth game of Huzaifa to reduce the lead to 4-3. Huzaifa however won the set 6-4 by holding his own serve.
In the second set, Shoaib was in cruise control and simply stunned Huzaifa. He was running away with the set as he played very consistent game from the base line and took commanding 5-1 lead by breaking third and fifth games of Huzaifa to win the set 6-3 to level the score at 1-set apiece.
Making a brilliant comeback, Huzaifa went ahead 4-0 in the decisive set by breaking the first and third game of Soahib on his way to winning the set 6-3 and with it the match that lasted 2 hours and 15 minutes.
This is Huzaifa’s second consecutive title which is a new record in Pakistan. By securing the title, he earned 21 international ranking points.
Earlier, in the girls singles decider the 15-year-old Aysegul played outstandingly to bag the first set 6-1 by breaking the third and fifth game of her unseeded opponent Soo Ha Jang of South Korea. Looking in excellent touch, the Turkish player displayed some excellent forehand and cross court shots which Soo Ha was unable to handle.
Ayesgul kept full command in the second set to lead 4-0 by breaking the first and third game of Soo Ha. The Korean reduced the lead 3-4 by breaking the sixth game of Aysegul. However, Aysegul won the set 6-3 by breaking the ninth game of her opponent, and the match in one hour and 10 minutes.
The victorious Turkish contestant by winning the title gained 21 ITF ranking points.